Thanks to recent changes, millions of people are now using medical marijuana as a source to treat a wide variety of medical problems such as chronic pain, depression, epilepsy, and even Alzheimer’s disease. With the growing number of positive scientific studies and legalization in various states in the U.S., evidence of increasing public acceptance is undeniable as medical marijuana is continuously gaining popularity and supportive reputation.

One of the most strongly established names in the emerging cannabis industry is Medical Marijuana, Inc. (MJNA), which develops marijuana-based drugs for the brain. The company secured a license for Patent 507 in the 1980s, marking the company’s characterization as a longstanding player in the industry. Securing these early patents allowed the company to commercialize marijuana-derived cannabinoids that have great medicinal value for patients. One important example of this is a particular cannabidiol (CBD) that has shown potential in seizing cell death after a traumatic brain activity (like a stroke).

Large portions of this success has been missed on the markets, with stock prices within the industry as a whole showing sluggish activity. MJNA shares have dropped below 7 cents per share in moves that have surprised many analysts, given the company’s Q2 reported net assets totaling $428.5 million. When taken in conjunction with MJNA’s market capitalization of $207 million, the discount looks to likely to create investment opportunities over the next several quarters.

Based on recent financial filings, MJNA’s gross revenue during the second quarter of 2017 rose by a substantial 230% when compared to the same period last year. Consequently, gross revenue during the first half of 2017 is 185% higher than that of the first half of 2016. These results show that the revenue growth for MJNA is on a major upward trend and this is a reflection of how fast the business is growing. 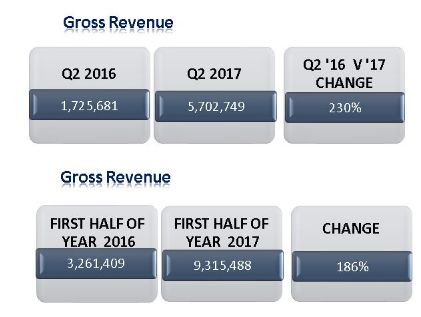 According to Forbes, sales from hemp-derived cannabidiol (CBD) products are expected to hit the $1 billion mark in the next three years. Being the leading company that commercializes cannabis products, MJNA is poised to capitalize on this trend in ways likely to surpass the majority of its competition within the industry. For investors, this could lead to substantial returns once the market closes the gap between the company’s net asset value and its traded share prices.

In August 2017, MJNA has announced that its subsidiary brand, Kannaway, had broken records in having the largest CBD hemp oil sales in the company’s history. The brand achieved its largest revenue performances in the quarter ending July 25, thanks to supportive trends in CBD hemp oil packages. In fact, revenues from the company have increased for the past 16 months and it is expected that MJNA’s total revenue this year will again surpass that of the previous year.

The evidence of growth can be seen in the numbers. In March 2016, Kannaway posted total revenues of $83,000. This year, revenues for the period ending in August 2017 are expected to come in at more than $3 million. MJNA continues to enter into new markets, and this will likely support the broader stock trend going forward.

Despite the aforementioned growth in stocks, the MJNA management says that their assets (about $428 million) during the second quarter of the present year are still higher than their market capitalization of just $255 million. With this, their stock opportunities still remain for those seeking undervalued assets in an otherwise elevated stock market. The Dow Jones Industrials recently broke to new record highs above 23,000.

But many of these bull runs have failed to push rallies in the emerging cannabis sector. Relative to the industry, MJNA offers a wide diversity of financial assets and fund counterparts. With its various range of products from its subsidiaries (i.e. Kannaway, KannaLife, and Axim), MJNA is not tied to a single product, a trend that is readily observed in the industry.

MJNA has not only invested in pharmaceutical companies producing CBD products but also in developing areas of cosmeceuticals, nutraceuticals, and industrial medical marijuana industries. MJNA is currently working with the Mexican government in changes made toward the legalization of medical marijuana in the region. With the presence of its subsidiary, HempMeds Mexico, MJNA will likely find it easier to expand its presence in North American markets.

Indeed, the medical marijuana industry really harbors great potential for growth. MJNA’s market capitalization of $207 million creates a massive discount for investors when viewed alongside the company’s net asset value of roughly $428.5 million. Global initiatives continue to support the outlook for strong revenues within the sector, and bring a turnaround in stock prices for MJNA.