To almost no one’s surprise that knows the man, President Trump announced Tuesday that he will withdraw the United States from the Iran nuclear deal. It would be hard to feign surprise when Trump, as a presidential candidate, berated the agreement at every turn.

The announcement makes a clear break from America’s allies in the agreement while fulfilling a major campaign promise Trump made. It dealt a clear blow to an international agreement negotiated by his predecessor, Barack Obama.

With a beaming Vice President Pence and newly sworn-in national security advisor John Bolton, Trump said, “Today’s action sends a critical message: the United States no longer makes empty threats.” It comes as the latest surprise in a foreign policy that has the world watching with stark attention.

The president was never a fan of what he termed “a horrible, one-sided deal that should have never, ever been made.” The accord, by all indications, was being violated from nearly the time it was signed. He added, “It didn’t bring calm, it didn’t bring peace, and it never will.”

The announcement came with the promise that the old sanctions that had been removed following the accord would be re-imposed. Trump made that abundantly clear by defining them as “instituting the highest level of economic sanction.”

Not surprisingly, British Prime Minister Theresa May, French President Emmanuel Macron and German Chancellor Angela Merkel issued a joint statement denouncing Trump’s decision. They vowed to “continue to meet their own obligations under the deal.”

Trump lives in a very different world than the Europeans. It is his belief, and that of America’s staunchest ally in the region, Israel, that Iran has blatantly violated the agreement in many facets. It took less than an hour for his predecessor to react to the news. 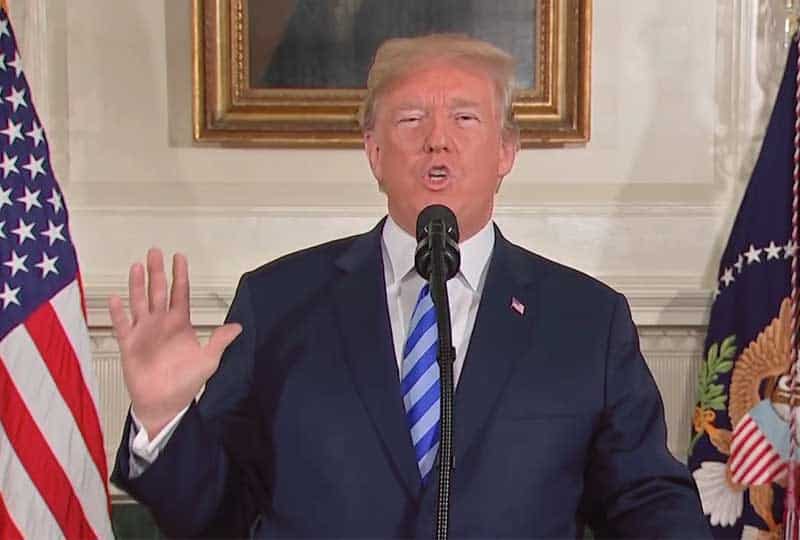 Obama called Trump’s decision “so misguided” and said it could lead to a war in the Middle East. It was a predictable response considering the Obama administration considered the agreement to be the cornerstone of their victories in Middle East diplomacy.

Further predictability came with veiled threats from Iranian President Hassan Rouhani. He warned Trump that Iran would “start enriching uranium more than before.” The irony in that statement is the conclusion by American intelligenece that they have been doing that all along since the agreement was signed. Israel was able to show the American government proof of that.

Trump was looking at a Saturday deadline to renew the waivers on oil and banking sanctions. The deal, which obviously made businessman Trump’s blood boil, provided Tehran billions of dollars in sanctions relief in exchange for accepting limits on its nuclear program.

Trump considered it nothing less than diplomatic blackmail and pure weakness by the U.S. to have ever considered such a deal. International inspectors had said Iran was in compliance with the terms of the agreement. However, the contrary had been graphically proven by the Israelis.

The announcement will now mean a complex, painstaking process of putting sanctions back into place. That appears to be of little concern to Trump’s foreign policy team. National security advisor Bolton told reporters shortly after the announcement that sanctions will be re-imposed immediately. There will be no new deals with Iran.

Ballistic missile development and regional aggression are the primary reasons for the disengagement. A number of Republicans provided support for Trump’s decision. One of Trump’s biggest supporters, Sen. Tom Cotton (R-AR) was one of them.

He released a statement that hinted a possible military action against Iran. It read, “Tough sanctions are a first step toward rolling back Iran’s campaign of terror, but it won’t be the last,” he said. “If the ayatollahs rush toward the bomb, the United States must end the program once and for all. Finally, let me say in unmistakable language: it would be a grave miscalculation of historic magnitude by the ayatollahs if they choose to attack Israel.”

Naturally opponents of Donald Trump were quick to respond. It was unclear whether their criticism stemmed from the Iran agreement or Trump in general. They included Sen. Bob Menendez (D-NJ), ranking member of the Senate Foreign Relations Committee.

Ironically, Obama never wanted the Senate involved with his deal with Iran. That was one of the main reasons he made the agreement free of any treaty-like implications. Trump pointed out that Obama’s agreement had three major flaws.

Those flaws included several nuclear restrictions sunset, inspectors cannot demand to see some military sites and the deal does not address other troubling behavior such as Iran’s ballistic missile program and support for terrorists. Any one of those factors was enough separately to kill the deal.

The Europeans has been madly scrambling to keep the agreement in place meeting separately with Trump. But the opponents were busy too. Last week Israeli Prime Minister Benjamin Netanyahu delivered a speech outlining how Iran had lied about its nuclear intentions. It is said that speech held tremendous weight with Trump’s final decision.

Meanwhile, French President Macron has warned the end of the deal “could mean war” with the country. Most experts feel the accord will still allow Europeans to deal with Iran effectively.

For his part, President Trump is open to further negotiations. He left it up to Tehran or other European nations to lobby for future talks. The president said, “Iran’s leaders will naturally say that they refuse to negotiate a new deal, they refuse, and that’s fine.”

One can only sense the business negotiator in Trump is doing the talking. Now it remains to be seen if Tehran blinks.