Donald Trump is now on his own in the race for the presidential Republican candidacy. Having cleared the decks of all the other contenders, who among them could he possibly pick for a running mate?

The answer to that question is not yet known, but he probably needs someone with relevant experience, and, since the competition was quite often nasty, probably none of the rejected candidates.

On Monday, Newsmax reported unnamed sources say Gingrich is now the leading candidate to go to the election as Donald Trump’s running mate.

Often, the running mate is picked to represent a key state that must be won in the general election. The VP nominee also needs to be tough, to take on any hatchet jobs, to protect the presidential nominee. 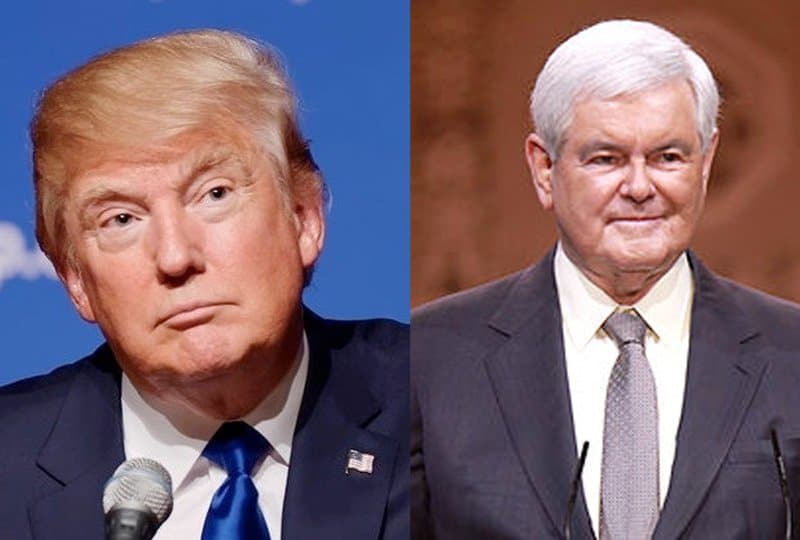 Gingrich is not the only one on the list, though. others include two prominent Republican women, New Mexico Gov. Suzanne Martinez, South Carolina Gov. Nikki Haley. Trump told the Associated Press he was now considering five or six possible candidates.

Sean Hannity said to Gingrich, ” From the very beginning, you seemed to be the one guy that had been in power, that understood this phenomenon that was going on. … explain what you think is going on there and how D.C. is so out of touch, where you got it and they never got it.”

In his answer, Gingrich said, “I endorse Donald Trump. I’m going to work very hard for the nominee. I didn’t get involved at that level before. … John Kasich is a very good friend, Ted Cruz ran a great campaign, and I tried to be an objective observer, but here’s what I think makes the difference … Because my background as a historian teaches me to let the facts tell me what’s going on, my first break-point was the night that he (Trump) was on with Megan Kelly, in the first debate in August, and everybody (nearly) said he lost that debate … as I watched the numbers that night … by 60-75%, people said Trump won. … and I said ‘something very profound is going on.’ If he is sending a signal that nobody in the elite gets, but 2/3 of Republican voters get.” – see the video for the whole interview.

Donald Trump has no background in politics. Like Dwight Eisenhower in 1952 who had never run for political office, Trump will need to rely on an experienced Washington political insider, who knows how to get things done.

Newt Gingrich could be the one. Gingrich is a plain speaker, hard-working, highly educated and a world-class debater. He may be a perfect match for Trump.

Trump is noncommittal, but a confidante reveals that his favorite is Gingrich.

Trump has already asked Dr. Ben Carson, one of the first Republican primary candidates to endorse him, to help pick his running mate. Apparently Dr. Carson is currently focusing on House Speaker Paul Ryan, to see if common ground can be found between them.

Trump has said he “can live with [Gingrich] for eight years.” Mr. Gingrich never formally endorsed Trump until a few days ago, but has followed and defended him during the primaries.

One of the things we know about Trump is that he not only values loyalty, he rewards it. Gingrich organized a meeting of Washington insiders dubious of Trump’s reputation. Those insiders included former House Appropriations Committee Chairman Bob Livingston, R.-LA, and Heritage Foundation President and former Sen. Jim DeMint, R.-S.C.

Trump also knows that Gingrich is a great strategist and communicator. Plus, he doesn’t come to a gunfight with a knife.

Gingrich is a popular “Reaganite,” and he will be able to reassure conservatives that he can help Donald Trump steer his path on the campaign trail.

In short, Gingrich is the kind of person Trump needs, and nobody would be surprised about such an announcement.