The question of the day is, who is the Rev. Al Sharpton and what credibility does he have in American politics and the lives of African-Americans he claims to represent? This is a man who has been caught in lie after lie about current events he misinformed black Americans about and has dodged paying his income taxes for years to the tune of millions of dollars.

Now, this dubious reverend has told The Hill that he is organizing a rally at the Martin Luther King Jr. Memorial in Washington on Jan. 14, six days before Trump’s inauguration. In other words, this compulsive liar and tax cheat is now involving himself in the government policies of the United States.

Sharpton said the rally would “put the Democrats on notice that we expect them to use the nomination hearings to really go after” Trump’s choices. Really? There are actually responsible Democratic lawmakers that will buckle down to this racial extortionist who threatens people’s very livelihood with his own brand of racist comments and demands on people’s businesses and reputations?

The reverend, who has his own “activist” talk show on MSNBC, added that he expected “thousands” of people would turn out for the event, which will take place two days before the public holiday commemorating King. Who are these thousands of people and why do they give any credibility to a man who is nothing more than a common rabble-rouser? 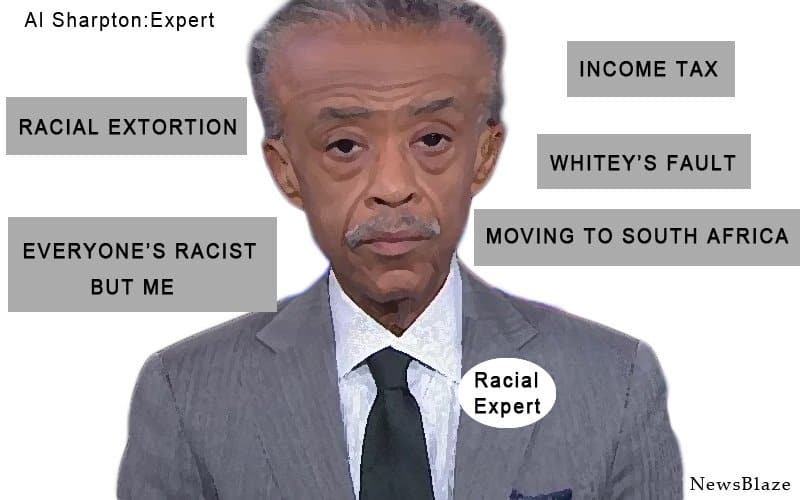 But there is Sharpton spouting off as if he is part of the government. “Our focus is not President Trump, who we don’t think we can turn around. Our focus is that the Democrats should not weaken, and so weaken everything that Dr. King achieved and everything that President Obama has achieved.” Can that be construed as a threat?

Is this the reason why Sharpton has had access to the White House over and over again throughout President Obama’s eight years in the White House? A man who owes the government millions of dollars in back taxes and is not allowed to leave the country? He proclaimed he would move to South Africa if Trump was elected. The IRS may have something to say about that.

Sharpton, a self-proclaimed expert on what is right and wrong with this country, is expected to target Alabama Sen. Jeff Sessions (R) as his first target after Trump picked him to lead the Justice Department. The Leadership Conference on Civil and Human Rights has previously asserted that Sessions has a “record of hostility” toward voting rights. Sessions was also rejected for a federal judgeship in 1986 amid accusations of racism, which he denied.

Of course, as usual for Sharpton, his ideas are only half-truths and there is no mention of Sessions actively seeking the death penalty for a KKK member who killed a black child. After Sessions was elected as Alabama’s attorney general, the KKK man was later put to death. No, that is left off Sharpton’s favorite way to describe his imagined enemies; racists.

The reverend isn’t done yet. He is also upset with Trump’s selection of Ben Carson, a black Republican heaven forbid, as his choice to lead the Department of Housing and Urban Development (HUD). Carson, who grew up in poverty in Detroit but went on to become a renowned neurosurgeon, is the first African-American named to Trump’s Cabinet.

That is of no importance. Rather the fact that a black man would actually fall out of lockstep with the real racist among us is unfathomable to this man of questionable intellect. Carson is a staunch conservative whose presidential run earlier this year was primarily fueled by his opposition to the Affordable Care Act, or Obamacare, and his popularity on the religious right. That’s not Sharpton’s way and shame on a man who is running out his 15 minutes of fame.

Sharpton does have his set of talking heads. Rep. Gregory Meeks (D-N.Y.), a senior member of the Congressional Black Caucus, took issue with Carson also. Meeks asserted that “Dr. Carson’s past statements on housing have not been consistent with the Congressional intent behind many of HUD’s programs.” He added that Carson had “lambasted the Department’s fair lending mission, calling our civil rights laws ‘mandated social engineering schemes.'”

The operative word for these black activists is “different.” Carson is a different sort of African-American public figure undaunted by pressure from so-called national black organizations, merely a front for the Democratic Party. Sharpton himself is quick to cheer on polls that show black voters backed Democrat Hillary Clinton over Trump by 89 percent to 8 percent on Election Day.

Sharpton considers that his referendum. It isn’t. If he looked a bit closer to the reality of the African-American in the society of today’s Democratic Party, he would see a growing discontent with the powers that be. Trump has made minor inroads before even assuming power with his ideas for a new and better relationship between Black America and the Democratic Party.

Al should fear that in the coming years, performance will outweigh decades of rhetoric. That will be on the welcoming shoulders of the man Sharpton fears most for his continued livelihood; Donald Trump. It’s a certainty Al will not be part of that strategy inside the incoming White House. His only access will be behind the velvet rope of a tourist line.

Others on the reverend’s hit list include the appointment of Steve Bannon to be Trump’s chief strategist in the White House, a former Breitbart News executive, also David Clarke, the ultraconservative black sheriff of Milwaukee County, who suggested that the Black Lives Matter movement, and anyone else that is attune to the hypocrisy of this black anarchist with his own personal agenda for wealth and power.

Sharpton is about to get a wake-up call to his real stature as a power broker. Without Obama’s suit to hide behind, Sharpton will be exposed for what he is by a newly powerless Hollywood elite, past wealthy donors vying for his blessing and a new America that does not categorize each American by ethnicity, but rather a new and unusual attribute; being an American.