U.S. Senator Kamala Harris is from California. It appears that she must make statements to the media to solidify that saddening fact. She is an avid supporter of Planned Parenthood and a pro-abortion advocate. It makes her recent comments to the media all the more curious.

Sen. Harris made some very interesting remarks following the mass murder of Florida students by a crazed 19-year-old dropout. In an appearance on MSNBC last Thursday, she had the proper audience for her curious remarks.

The commentator prompted her on the subject near and dear to liberals; gun control. Pro-abortion advocate Harris responded, “This cannot be a political issue; we have to be practical. I support the Second Amendment, but we have to have smart gun safety laws.”

It was her next sentence that startled people who know her political ideology concerning abortion. She said, “And we cannot tolerate a society and live in a country with any level of pride when our babies are being slaughtered.”

One of the biggest complaints Americans have concerning their politicians is the extreme hypocrisy many of them possess. The above quote from Ms. Harris is an extreme example. She is one of the strongest abortion supporters in this country. At the very least, she is one of the most high profile advocates.

It appears the senator wishes to have her proverbial cake and eat it too. Is this just part of the strategy she is utilizing as she makes her Obama-like run for the White House? It is a gutsy move considering her 100 percent pro-abortion rating with NARAL Pro-Choice America and a 100 percent rating with Planned Parenthood’s “2018 Congressional Scorecard.”

And Sen. Harris has a failing memory; she received $43,155 in donations from pro-abortion groups during her run for the Senate, according to The Daily Wire. In other words madam, you are a liberal hypocrite pandering to both sides of an issue. 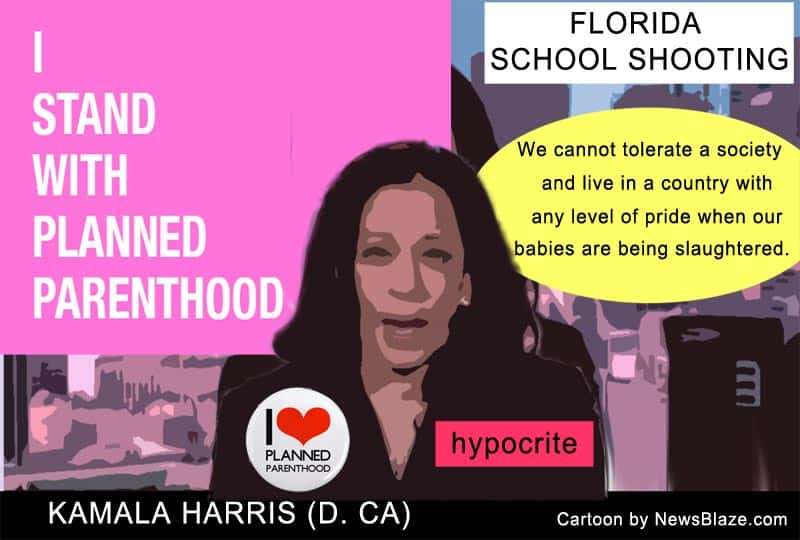 Planned Parenthood is no mystery to knowledgeable Americans. What they advocate is controversial and most people know it. Ms. Harris told the Los Angeles Times two-years-ago, “We can all agree on one thing. Washington is broken. Voting to strip federal funding from an organization that provides vital health services to 2.7 million Americans is the epitome of dysfunction,” referring to a petition that was circulating.

Her questionable position on abortion is indicative of the far left; do as I say, not as I do. Her confusion between aborted babies and “children” is callous and self-serving. She speaks of slaughtered children on the one hand, but professes indignation at those opposed to extracting their belief of life in the womb.

Unborn life is a human being to many conservatives. Their belief is their lives are no different than the 17 souls murdered in Florida. It would be interesting to watch Harris defend her position in a debate.

The senator has every right to push for gun control. Her handlers insist that she does. But thinking Americans know she could not care less about those lives snuffed out due to abortions. If and when she achieves presidential candidate status, she should be aware of one stark fact.

There is no way she will ever be president of this country unless she means what she says. From the changing mood of America these days, our current president has made it mandatory.