Spirits were high for the Democrats on the first night of their convention in Charlotte, N.C. Faring from Texas myself, I focused most of my attention on the keynote speech of San Antonio Mayor, Julian Castro, who managed to energize the convention crowd with his testimony of how he’s bringing the American Dream to San Antonio. The key is to provide opportunity to people, by making education available to those who can’t get it so easily.

In San Antonio, Mayor Castro has in place a Pre-K program and they have opened Cafe College, where students get help with test prep and financial aid paperwork. Opportunity, as I see it, must be made available to everyone, and especially to those who are struggling to find it. If those with less access to opportunity are given this option, they then will have the possibility of getting a better job.(It’s that simple!) 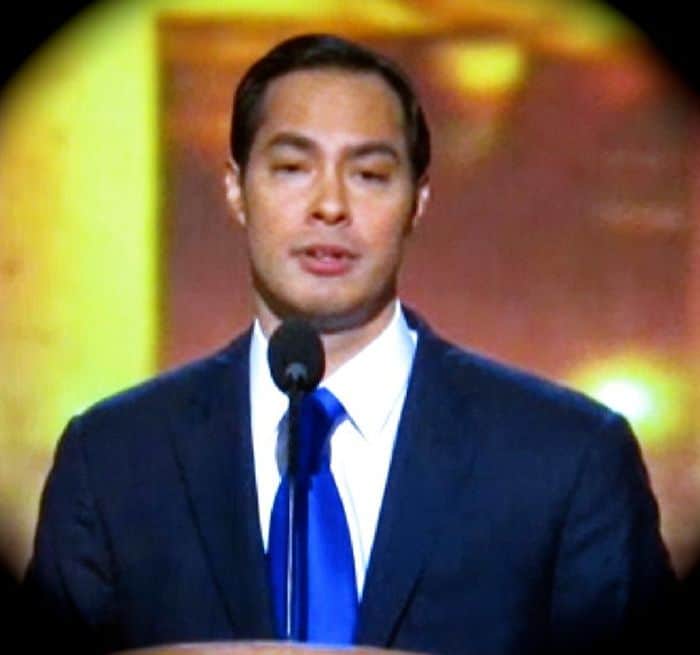 If in turn, these struggling young people do actually get a job, then it’s feasible that the overall economy will improve. Therefore, the middle class will grow, once it’s fed by those who reside closer to what we often refer to as the third tier (or a lower social class). This is the basic belief of the Democrats that sets them apart from the Republicans. From the bottom up, not the top down!

The Republicans believe it comes from the top down, a very elitist belief, such as the poor will benefit only if the rich throw them a few crumbs as a gesture of their mercy and benevolence. This is most offensive to most Americans! But the Democrats believe the middle class can only grow by those from the lower tier pulling themselves up by their bootstraps, with a little help from their friends (such as college loans or scholarships).

Julian Castro scored some points with his anecdote about Romney saying students should simply borrow some money from their parents, to jumpstart their educations and careers. What if their parents don’t have any money? My favorite part of Julian’s speech is where he says that Romney-Ryan will not only cut public education, cut Medicare, transportation and job training, they’ll literally dismantle the middle class.

We know this is true, because that’s exactly what George Bush did, where the wealthy got big tax cuts and the middle class got nothing, but lost their job opportunities to cheaper labor competition overseas (cutthroat laissez faire Capitalism in action). Under Bill Clinton, a vital, growing middle class was firmly in place, and that’s why the economy was percolating on all 8 cylinders. That’s also the reason why the federal deficit was eliminated, with a surplus in place when Clinton left office.

And that’s exactly what Bush’s policies did; they dismantled a beautiful, thriving middle class, who saw themselves moved over to the 3rd tier of despair, unemployment, and hopelessness, while the 2% just got richer and richer. By the time George Bush left office, the American economy was on the verge of absolute collapse, just short of the Great Depression, initiated by the stock market crash of 1929. His policies couldn’t have failed any worse, even if they tried!

Obama was handed off a baton of total economic disaster! It’s amazing how far we have come in just less than four years. I return to the text of Julian Castro’s speech (which I had the good sense to print out). Julian explains clearly the path to recovery, which has been implemented by the President, and he also has managed to dig us out of a huge hell hole of economic despair. The San Antonio Mayor did a great job of explaining how we bring the American Dream back to our people: invest in their education so they can get a job!

Transcript of Julian Castro’s speech at the DNC | Fox News