NewsBlaze News
Home USA Politics Did Obama Have a Hand in Scheme to Smear Trump?

The American people have been inundated over the last 18 months about how then-candidate, now-President Donald Trump has ties to the Russian government and colluded with them to influence the 2016 election in his favor. Not a single shred of evidence exists to prove that.

Now we learn from the heart of liberal journalism, The Washington Post, it was the Democratic National Committee and presidential candidate Hillary Clinton who funded and worked with Fusion GPS during the 2016 election. Yes, an opposition research firm with ties to Russia that paid a former British spy to compile the “Trump dossier.”

The Federalist now reports that the still-active campaign organization of former President Barack Obama, Obama for America, paid nearly $1 million around the same time to the same law firm that funneled Clinton and DNC money to Fusion GPS.

Do not strain yourself to find that information in most of the mainstream media, because it is either unreported or buried near the obituaries. But the law firm known as Perkins Coie reportedly received a payment from OFA of $98,047 in April 2016.

This was supposedly for “legal services.” Amazingly it was at the same time they first contracted with Fusion GPS to conduct opposition research on Trump. Is this a coincidence?

That was not the end of it. Obama’s organization made another larger payment to Perkins Coie in September 2016 that totaled $700,000 that went along with smaller payments totaling $174,725 that were disbursed through August, 2017. To thicken the plot, Marc Elisas, an attorney for Perkins Coie, had served as a legal counsel for Obama’s OFA at the same time he represented the DNC. Is this yet another coincidence?

According to the report, after nearly $1 million received from OFA in 2016-2017, Perkins Coie also received payments in 2016 of $5.1 million from Clinton’s Hillary For America campaign as well as $5.4 million from the DNC. It all becomes murkier by the sentence.

How much of that funding went through Fusion GPS to pay dossier author Christopher Steele? How much was paid to people in Russia who obtained Steele’s disputed information?

Not affiliated with the liberal media, Fox News has reported that former Clinton campaign spokesman Brian Fallon indicated Hillary “may have known” about her campaign helping to fund the anti-Trump dossier. As is usually the case, there is always a disclaimer involved with a Clinton.

The DNC is doing its best impression of Sgt. Schultz proclaiming they “know nothing.” It is highly unlikely none of those involved were oblivious to the millions of dollars funneled into Fusion GPS and what it paid for. It prompted a tweet by the president himself on Monday:

Both the minority Democrats and their eager servants in the media have spent themselves attempting to corner Trump. The ongoing and tiresome narrative that Trump colluded with the Russians to interfere in and influence the election continues. But now it appears the Democrats were engaged in unethical and potentially illegal activities.

Was Obama involved in funding the dossier? The discredited compilation of disinformation was utilized to obtain a FISA warrant to spy on the Trump campaign and transition team. To sum it up, Obama’s campaign organization also paid the Perkins Coie law firm money at the same time they began funding the work of Fusion GPS. The dossier attempts to discredit and smear Donald Trump. 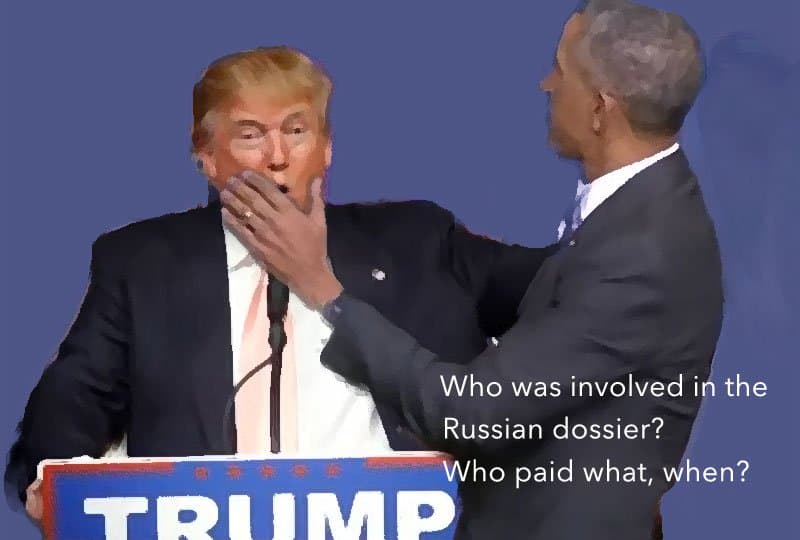