The mainstream media and certain members of Congress are doing their best to downplay the enormity of change coming in the White House and administration of Donald Trump. The president-elect’s appointments to high-level cabinet positions and White House duties is moving at breakneck speed within the transition team headed by vice president-elect Mike Pence.

Unlike the present cabinet of President Obama, Trump’s newly appointed professionals are mainly private sector citizens who have had small businesses, met a payroll and employed other individuals. The number of pure academics, professional politicians and heavy campaign contributors is negligible.

Trump is a successful businessman who delegates authority to the most qualified person for the task at hand. His business model for the Trump administration is clear; get the right man/woman for the position and give them the tools to succeed.

Whereas the speculation is Trump will rule like a king, it is quite the contrary. Trump will be a working figurehead surrounded by the best and the brightest, much like the Kennedy administration (1961-63). For instance, General Mike Mattis, a highly respected career Marine battlefield commander will head the Department of Defense. Mattis is not an academic coming to the job reading books about it. There will be no “theory” involved with a proven leader of men in wartime conditions.

Up and down Trump’s selections for key cabinet positions and government jobs, the operative words are real world experience. There are not a bunch of professors from Ivy League schools who have never had a real job, but rather individuals who have rolled up their sleeves and actually done something beyond the classroom or think tank.

Health and Human Services secretary – Rep. Tom Price of Georgia. A longtime opponent to Obamcare and an orthopedic surgeon. Real world experience for a job that demands it.

Chief of Staff – Reince Priebus. Former RNC chairman. A clever choice for Trump to heal the political wounds of his party suffered over the diversity of opinions surrounding his candidacy. Preibus is the voice of the party and will have daily contact with Trump.

CIA director – Rep. Mike Pompeo. A three-term congressman from Kansas with vast experience in foreign affairs. Former Harvard and West Point graduate, another appointment with real world experience and ready for the job from day one.

National security adviser – Lt. Gen. Michael T. Flynn. Like Mattis at defense, Flynn is a battlefield warrior. Highly knowledgeable about the Islamic State (ISIS) and will undoubtedly take an aggressive stance in the Middle East. Both Mattis and Flynn appointments send a strong message to our enemies abroad.

Transportation secretary – Elaine Chao. Could easily be construed as a peace offering to Senate Majority Leader Mitch McConnell. Chao is his wife. However, she was a member of George W. Bush’s cabinet and served two terms as Secretary of Labor.

United Nations ambassador – Gov. Nikki Haley. Strong voice of opposition to Trump during the South Carolina primary in her state. Goes to show Trump’s gift at deal-making. He has given the young governor the opportunity to gain national exposure for future political office. 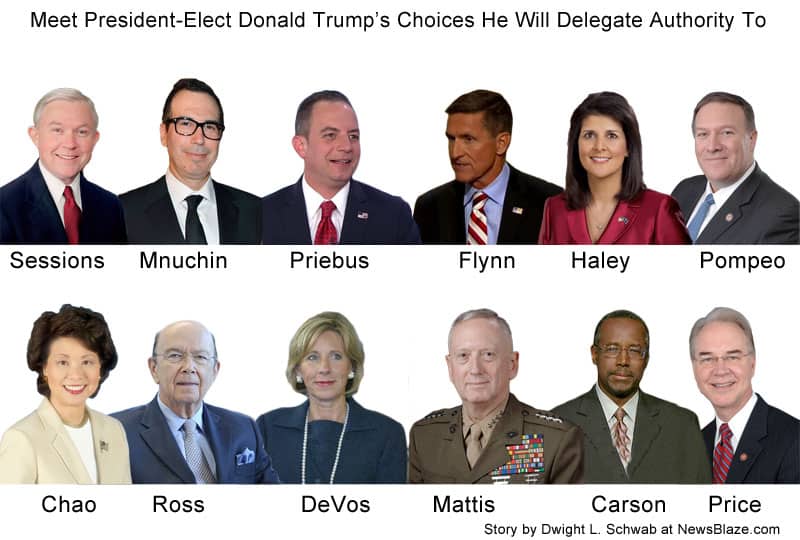 The left-leaning media will attempt to punch holes in these appointments wherever they can, but bi-partisan political experts overwhelmingly agree that Donald Trump is putting his stamp on what government should look like in his vision for a stronger and better America.

Any talk about challenging the confirmation of appointees like Jeff Sessions at DOJ are basically moot. Why? In 2013, then Majority Leader Harry Reid instigated the “nuclear option” which demands only a simple majority to confirm the president’s choices for his cabinet. The GOP holds the majority of senate seats at 52.

End of discussion thanks to Harry.