How many clear-thinking Americans are growing tired of the anti-American rants of some of their elected officials? If recent polling is any indication, it will greatly affect how many people vote in the midterm elections.

Her full statement should be read by all Americans: “The Trump Administration’s raids were a shocking abuse of law enforcement power. Yet again, the White House has reached into our communities to indiscriminately detain scores of hard-working, law-abiding immigrants.” – Nancy Pelosi.


Pelosi continues, “Fully half of those swept up in the ICE raids have no criminal record. This raid was intended solely to terrorize innocent immigrant families and instill fear in the hearts of our communities – not to keep Americans safe. Parents will now be torn from their children, and spouses ripped away from their loved ones.”

The congresswoman concludes, “The Administration continues to brazenly target the cities that refuse to bow to its blatantly bigoted anti-immigrant and mass deportation agenda. The people of the San Francisco Bay Area will continue to oppose these cowardly attacks, and we will remain open to the patriotic immigrants who are the constant reinvigoration of America.”

Perhaps San Franciscans do not have their mouths agape by this hysterical elected official, but her time as a national figure appears to be almost up. She accuses the Trump administration of abusing the law? How is that?

These are laws on the books. Can you abuse your law enforcement power by simply enforcing the laws as they are written? Her logic is utter nonsense. She further claims half of the illegals swept up in the raids had no criminal record. Does the word “illegal” mean anything to this woman? 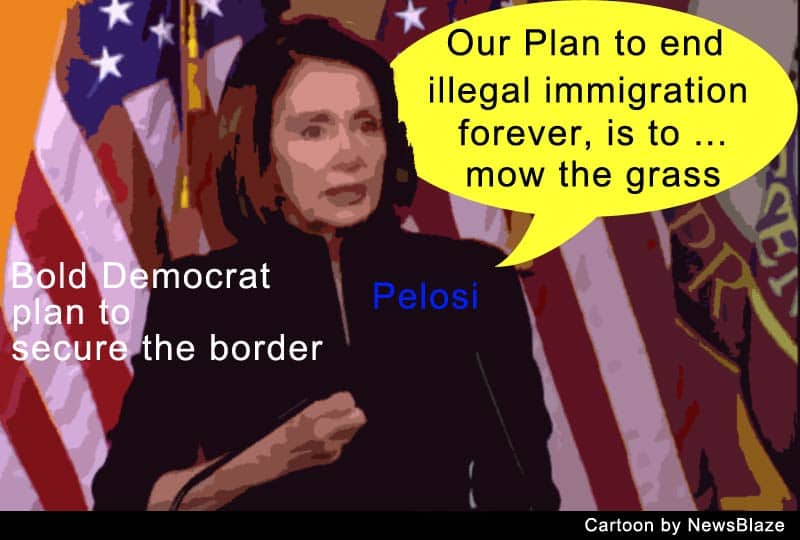 Pelosi also argues that the raids were about terrorizing immigrant families and blatantly bigoted. The centerpiece of all liberal arguments on the verge of losing becomes injecting something about racism.

Pelosi also doesn’t understand the word “bigotry.” She thinks it means something about race, but it actually means “intolerance towards those who hold different opinions from oneself.” Yes, Pelosi is a bigot!

The elderly congresswoman refuses to “bow” to the president. That can be defined as refusing to obey or enforce our laws. That is a crime punishable by jail time. Pelosi’s reasoning is a complete distortion of reality. Those she calls patriotic immigrants are not citizens of this country. These people are actually migrant workers and not immigrants at all.

The voice of reason was produced by Acting ICE Director Thomas Homan. He said, “Not only did she (Pelosi) say they were cowardly; she said that ICE was terrorizing immigrant communities. The people we arrested during these California operations, lewd and lascivious acts with a juvenile, assault with deadly weapons, murder; these people were terrorizing immigrant communities. We’re protecting people, we’re protecting the American public.”

There is no such thing as arresting an innocent illegal alien. The term itself is an oxymoron. Either they are here in violation of federal law, or they’ve had their due process, ordered removed, and they ignored a judge’s order.

The bottom line for Americans to understand for their own personal safety is this. The people ICE arrested in the Oakland raid tipped off by its mayor were not detained by California local jurisdictions. They had to be hunted down because the local police did not have them in jail where it was safe for ICE to arrest them.

This is what political correctness looks like close up. It is cool to endanger the very lives of law enforcement officers in the progressive hip culture of lawlessness disguised as compassion and tolerance.

Feinstein Attacks Law She Voted For

The hypocrisy of leftist legislators is mind-boggling. Senator Dianne Feinstein (D-CA) actually voted for the laws that she is now attacking ICE for enforcing. This is all to appeal to the far left and keep her job in Washington safe. Not a care in the world for the safety of her citizens, just getting the votes necessary.

If so-called “progressives” don’t like the laws, and that includes people like Nancy Pelosi and Dianne Feinstein; then find the plurality to change them. They are legislators, correct?

The left media will not cover this issue as journalists, but rather as a liberal encounter group. They are nowhere near the majority in the thinking on this national issue, but will appear that way in their almost unanimous coverage. It is up to the American voter to sort through this political mumbo jumbo of the far left.

Is it your country or not? It is time to express your outrage before a small minority runs your life; literally. Their hatred of your nation may just get you killed.