It has been almost fifty years since America put the first man on the moon. The operative word in that sentence is “America.” That is important to remember in its historical context because today’s generation will see it differently.

Take for instance the new film being released October 12th, “First Man.” It’s star, Ryan Gosling, called the moon landing “a human achievement.” It is his contention that the July 20, 1969 landing was a culmination of “mankind,” rather than an achievement of the United States of America.

The movie is a biopic about Neil Armstrong’s history-making walk on the moon with a catch; it is featured without the famous planting of the American flag. Gosling explained that by saying, “I think this was widely regarded in the end as a human achievement and that’s how we chose to view it.”

Gosling theorized that Armstrong was such a humble man merely because of his first words stepping off the module: “That’s one small step for man, one giant leap for mankind.” In other words, the millennial Gosling interprets Armstrong as a globalist. 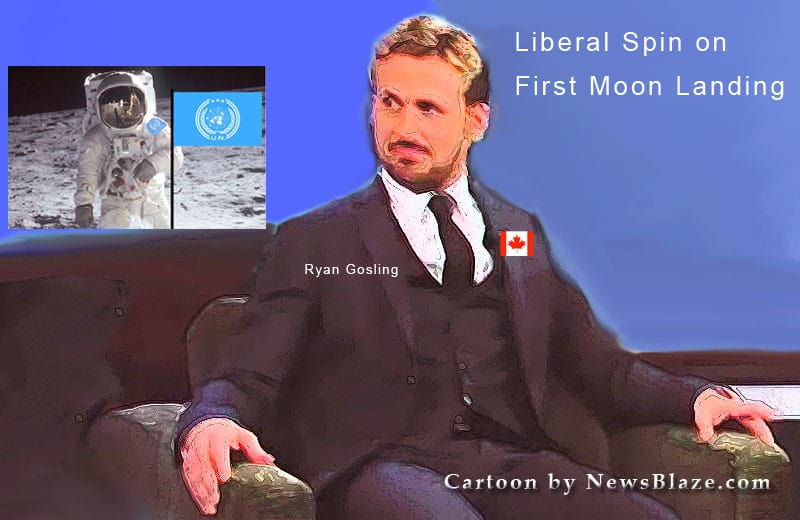 That does not fit the script of the director, Damien Chazelle. In his mind, it was not the American people, but the people of the world. Liberal Hollywood finds it more appealing to dilute America’s greatness. A higher grossing box office overrules the distorting of historical fact. Chazelle made the decision not to include the iconic image of Armstrong planting the American flag on the moon.

This new narrative of American history creates a false image of this country. The filmmaker is clarifying the reasoning for the omission of the flag planting as Neil Armstrong’s subjectivity. Speaking for the deceased Armstrong, Gosling said, “I also think Neil was extremely humble, as were many of these astronauts, and time and time again he deferred the focus from himself to the 400,000 people who made the mission possible.”

Although the director and producers of the film want to present the moon mission as something concocted by the United Nations, it was an all-American endeavor. In modern day Hollywood, that is not something that works for their films. America is the evil behind most bad things that have happened the last 240 years and that is how they wish to portray this country in their “art.”

If Armstrong were alive to defend himself, he would call his planting of the flag as symbolic of a banner of peace. The film’s objective is a fabrication of history. Gosling, who is Canadian came out in 2015 as a fan of Bernie Sanders while later spoofing Donald Trump.

He is the perfect casting for Hollywood’s perception of this country and our rich history. When asked if the film was an “un-American take on the moon landing,” the liberal actor replied that Armstrong’s accomplishment “transcended countries and borders.”

Gosling’s viewpoint is today’s revisionist view of America as it fits with the liberal’s ideology. Were Armstrong alive today, he would be horrified. He was a proud American who was a test pilot and highly decorated naval aviator who flew 78 combat missions during the Korean War.

“First Man” star Gosling laughs off any criticism of his words and interpretations by saying, “I’m Canadian, so might have cognitive bias.”