John McCain is certainly living up to his reputation as a rebel. And from this minute it appears for the betterment of us all.

I am happy to made the mistaken guess big Mc would choose Carly or Meg as his running mates. Carly got booted from HP for good reason, bad product line as a result of not caring as much about Consumer Products as about her own ego.

Meg on the other hand, who came to eBay when it consisted of but 5 t-shirt sandal clad yuppie techs then via phenomenal growth, quickly turned it into the premiere Internet sales site, didn’t have self control to rein herself in after buying Pay Pal. She let her lust for power run amuck thus eBay became a wasteland for taking advantage of buyers and sellers of mostly junk. 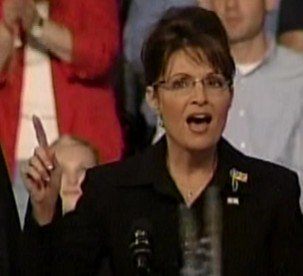 One should accept that Blitzer is one of those who would willingly, handily, easily, if allowed, destroy America to satisfy Jews of both the U.S. and Israel. No, I am not anti, I am one-quarter Jewish myself. That is no reason to allow a few radicals to push this country into disaster to please some people’s religious faith. Notice that word was not ‘fact’ but ‘faith’.

Back to 44 year old Sarah, who will undoubtedly get snacked around for her age, by Liberals who want a past drunk, druggie, friend of Los Angeles terrorist bombers, also Chicago’s Tony the taker criminal, to be the next Whitehouse resident.

While McCain introduces Palin in Dayton, Ohio, as this is being written, as John dances with joy celebrating his 72nd birthday, his good decision has a couple of downsides.

It is worrisome that she sends her own son to Iraq. Not helpful to women that she herself elected to give live birth to a infant destined to live a short, difficult at best, life.

Pure Libertarian here, I loathe her first choice above, revere her for the second.

The concern we should all have this minute is, will she try to deprive us of our rights to make different decisions?

They will, as previously forecast, next week peel the hide off Obama.

For now, the enjoyment of this election just rose 10 points. Stay Tuned for more fun.