Republican Senator John McCain of Arizona is a national hero and now is dying. He is a likable man who is popular among the other lawmakers of Washington, D.C. His personal history as a Vietnam veteran pilot who was shot down over Vietnam and suffered as a POW for seven-years is legendary.

McCain ran against then-fellow Senator Barack Obama for the presidency in 2008 and lost. In doing so, he accepted his fate with grace, humor and his brand of honor. He has served the state of Arizona and its people for decades in the nation’s capital.

But the last chapter of his life may be remembered for his split with the Republican Party as Arizona slowly turns from a red state to blue. If one person can be singled out as the main reason for the failure to stop Obamacare’s failure, ironically, it is John McCain, a Republican.

He is responsible for the final rejection for even the slightest alterations to a bankrupt healthcare law. Why would such a renowned leader of the Republican Party throw such an embarrassing wrench into efforts to change or repeal such an unpopular law; a signature promise by his president to fix it?

To understand this complicated man, you have to look beyond the quick smile and gentle demeanor. One can assume that then-candidate Donald Trump’s outrageous comments during the Republican primary in 2016 did not endear now-President Trump to McCain. This was a job McCain sought and lost.

Trump openly called him a “coward” for being captured and held as a POW in North Vietnam. Trump did not consider captured serviceman as heroes, or at least not this one, because of his reported actions in custody. McCain was most certainly taken aback by such inflammatory comments and never forgot the snarky rejection of his very self-persona; honor.

But it goes deeper than that. McCain has enjoyed his long reputation as a “maverick” and a “rebel.” It has evolved over the decades as he has proudly taken it to heart. It has produced the self-indulgence of this man who puts himself before what’s right for the country. It was on display eight-years-ago in his home state. He was first a moderate on strict new laws on illegal immigrants, only to take a 180 turn-about when home state polls were adamantly for enforcement.

But McCain’s self-image goes back even further. It derives from his involvement in the Keating Five scandal in the 1980s. The savings and loan bank scandal riveted the country. He was eventually exonerated of all charges, but something very precious and public was tarnished; his honor. It was the essence of his life’s mission.

Thus, his vote against the Obamacare “repeal” bill last week, sunk the measure. It culminated his own betrayal of Republican voters who demanded the abolishment of Obamacare. It wasn’t the content of the bill that drove the senator to his decision. It was the process. In his mind, it was without “honor.”

He saw Republicans ramming repeal through just like the Democrats had done through passage of Obamacare in 2010. McCain feels he owes his career and reputation to the public’s (or is it more the media’s) image of him as a man of “honor.” It is instilled in him and made this public servant a wealthy man. He didn’t want to see his own party bullying Democrats as they had done to Republicans.

There was one other important issue that may have affected his “No” vote. That was the 2018 Defense Policy Bill, which McCain wanted to bring to the floor. Democrat Chuck Schumer would not allow it, unless Republicans abandoned the Obamacare repeal.

But aside from his perception of himself, and his pet bill, it was Donald Trump. McCain has a long memory and his vote had as much to do with Trump’s national television slur during the primaries. McCain’s words speak of a higher standard in the Senate, clouded by his obvious hatred of Trump the man. He lost the presidency with his “honor,” while Trump the flamboyant billionaire succeeded by all means alien to his thinking.

But his self-perceived principles were not big enough given the enormity of the stakes. This should have been about the country he obviously loves, not John McCain’s petty jealousies and hatreds. His actions were as much a “screw you” to Trump, his fellow senators and the people who voted for Obamacare rejection than any “principle” he avows to.

It may be over-psychoanalyzing, but the American people he claims to love will suffer for his personal feelings. That should not be the legacy this good man and the country he loves. 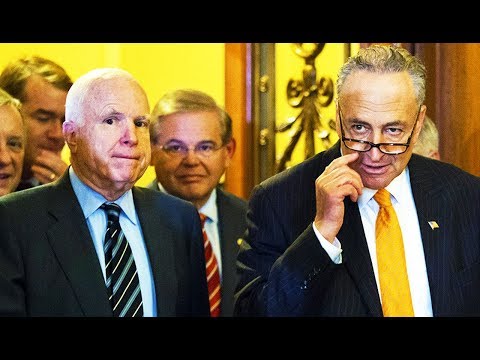