Finally in presidential election 2016 we have reached a point where Iowa has fulfilled its destiny. As well as being the first State to hold a referendum on the presidential hopefuls, it is the state that causes some to throw in the towel.

That is what happened to Former Arkansas Republican Governor Mike Huckabee, and Former democrat Maryland Governor Martin O’Malley on Monday this week. Then on Wednesday, republicans Former Pennsylvania Sen. Rick Santorum and Kentucky Sen. Rand Paul threw in their towels.

The Democrat side of the campaign is now a two horse race.

Santorum, a deeply conservative evangelical Christian has also contested into thousand 2012. In that race he won almost a dozen contests reaching for the Republican nomination. His departure this week shows how hard it is to get voters attention in the race for the presidency.

This was a disappointing finish for Santorum. In Iowa he highlighted his evangelical beliefs, but his message was drowned out by the big-spending Texas Senator Ted Cruz. Cruz spent 10 times more than Santorum on his extremely well-organised get out the vote campaign. Santorum could not even hold the religious conservatives that were in his base four years ago.

This shows that in presidential politics, money is king and no matter how good your message, is the voters don’t hear it, you may as well not say it. The crowded republican field is now less crowded.

Senator Rand Paul (R-Ky.) was unable to fire up his Libertarian base that his father, Ron Paul, built into a powerful national coalition. Announcing he would leave the race, Senator Rand Paul said, “It’s been an incredible honor to run a principled campaign for the White House … Today, I will end where I began, ready and willing to fight for the cause of Liberty.”

The libertarian never managed to get off the launching pad, being drowned out by Ted Cruz and Donald Trump. He said the front runners ” … sucked the oxygen out of the race.” Pundits say the reality is that Paul’s approach to foreign policy, in which he is a non-interventionist, and the way that he sidestepped the threat of terrorism, were his downfall.

Rand Paul is relatively young and there will be plenty of time for him to try again. This was his first time as a presidential candidate, and he may have expected to have attracted his father’s support base. But it was not to be, and it appears that many of Ron Paul’s backers who helped him in the 2012 election moved onto other candidates such as Trump and Cruz.

Rand Paul was his own worst enemy. He upset some of the people he really needed, if he was to pick up Ron Paul’s base. One of the best examples of this was that Drew Ivers, Ron Paul’s 2012 Iowa chairman, did not endorse Rand Paul. Ivers said “[Rand Paul’s] decision to move to the middle and support a number of moderate Republicans in the 2014 elections that sent us a real signal about the application of his ideology.” 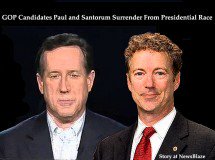 In this coming week Will be the New Hampshire primary. Further fallout in the Republican ranks is expected this month after New Hampshire and again after the South Carolina primary later this month.

The presidential election season is living up to its expectations of crushing the hopes of politicians who are not prepared.

The ‘Cancel Culture’: Cancel the Democrat Party – Part One

Hold China Accountable – or Give It Even More Control?