Just a few short days, after the mass shooting in Aurora, Colo., took away the lives of a dozen people in a movie theater; the debate over gun control once again has become the predominant issue in national politics.

The topic has been nonexistent in this year’s presidential election and has not been political fodder for the national conversation since former Rep. Gabrielle Giffords, D-Ariz., was brutally shot in the head in January 2011.

Weapons of War Don’t Belong on The Streets

“My thoughts are these – pure and simple – weapons of war don’t belong on the streets. This is a powerful weapon. He had a hundred round drum,” Sen. Dianne Feinstein, D-Calif., said on “Fox News Sunday,”

“I think – you know, we’ve got to sit down and really come to grips with what is sold to the average citizen in America. I have no problem with people being licensed and buying a firearm. But these are weapons that you are only going to be using to kill people in close combat.”
– Feinstein 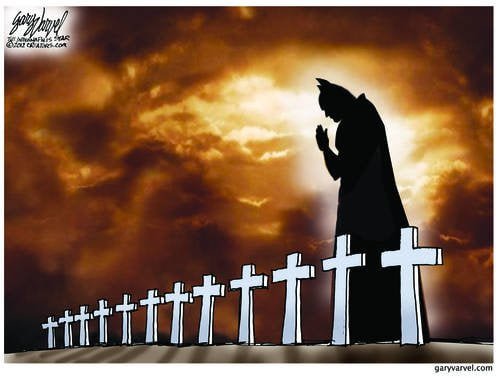 “I think that the strongest Second Amendment rights people would be glad to have a conversation, but to somehow leap to the conclusion that this was somehow caused by the fact that we don’t have more gun control legislation, I don’t think, has been proved,” he said on CNN’s “State of the Union.”

The shockingly brutal shooting at the movie theatre in Aurora, Colorado, which occurred during a screening of the new Batman movie, has caused many in the country to call for stricter gun control. I’m not going to condemn anyone for politicizing this tragedy, because these things should raise concerns and spark national debate about such things as preventing incidents like these in the future. I am however, opposed to people who use incidents like this for political gain.

Is It a Viable Solution?

Norway is a country with some of the strictest gun control laws, and yet they didn’t stop Anders Behring Breivik from killing 69 people. Toronto has strict gun laws, but that didn’t stop the recent shootings there. So the question is does gun control really work, and is it a viable solution? Maybe some of the deeper socio economic issues need to be addressed in a country like the United States where the top 2% reap all the rewards and how it may or may not factor in these incidents.

Even if stricter gun control measures were in effect, people determined to commit these horrid crimes will still find ways to do it. There are numerous ways people can kill that aren’t controlled nearly as much as guns are (For instance: baseball bats, knives, vehicles, fertilizers).