There was another black eye added to an already decrepit media Friday night. Special counsel Robert Mueller’s office issued a rare statement disputing an explosive report from BuzzFeed News that President Trump had told his former lawyer Michael Cohen to lie to Congress.

Where the reporters got such information is unknown, but they stand firmly behind the story even after Mueller’s disclaimer. A number of Democratic lawmakers had seized on the report throughout the day on Friday, calling the latest bombshell allegation against Trump the most damning yet, with several raising the possibility of impeachment.

Special counsel spokesman Peter Carr issued a telling statement Friday night. It said, “BuzzFeed’s description of specific statements to the Special Counsel’s Office, and characterization of documents and testimony obtained by this office, regarding Michael Cohen’s Congressional testimony are not accurate” 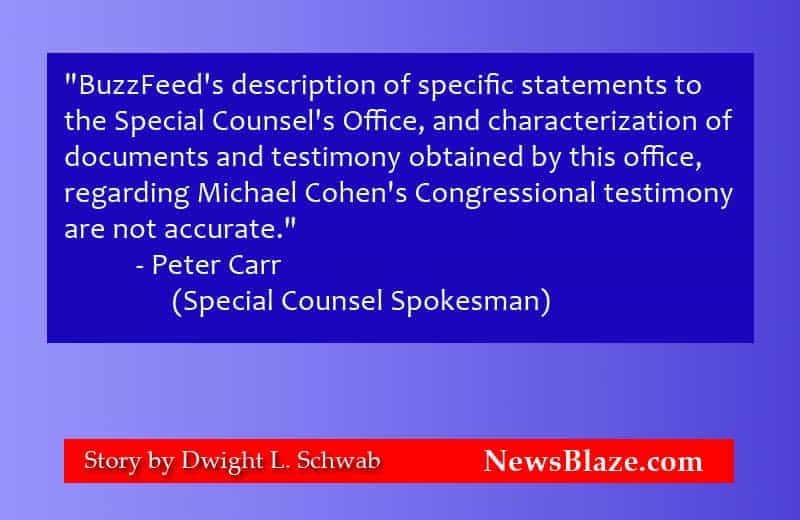 That pretty much sums it up from a source you can rely on. But BuzzFeed News had its own statement responding to the special counsel that it stood by the report, while calling for Mueller to detail what parts of its reporting he was specifically disputing.

BuzzFeed told The Hill, “We stand by our reporting and the sources who informed it, and we urge the Special Counsel to make clear what he’s disputing.”

The report said federal investigators have evidence that Trump directed Cohen to lie to Congress about the timing of negotiations over a potential Trump Tower in Moscow. The story cited “two federal law enforcement officials involved in an investigation of the matter.”

The story itself is so ridiculous that the Mueller team, which has remained mostly silent throughout the investigation, felt compelled to go public with their disclaimer of the story. Nevertheless, BuzzFeed said “We spoke to federal law enforcement officials involved in the investigation … who told us the president directed Michael Cohen to lie to Congress.”

Donald Trump Jr. reacted to the special counsel’s statement denying the BuzzFeed report on Friday night. The president’s eldest son tweeted in part to argue that “BuzzFeed proves what a joke the coverage of the witch hunt has been.”

The news media is ranked among the lowest professions by most major polls. It is a very serious problem when Americans cannot believe their own news sources. This is a huge blow to that credibility.