An obscure article appeared in the nation’s newspapers the other day. Buried deep inside section two, far from the usual stories of murders, political intrigue and senseless violence was a long ago tale of American courage and heroism.

April 16th marked the 77th anniversary of an event that turned the tide in the Pacific theater during WWII. A mere four months after the sneak attack by Japan on the American naval installation at Pearl Harbor, the Americans struck back.

Lt. Col. Richard Cole, the last surviving member of a group of brave Americans involved in what was to be known as the “Doolittle Raid” died last week at the age of 103. Cole was Jimmy Doolittle’s co-pilot in the lead bomber that launched the surprise counter-attack over Japan in April 1942. 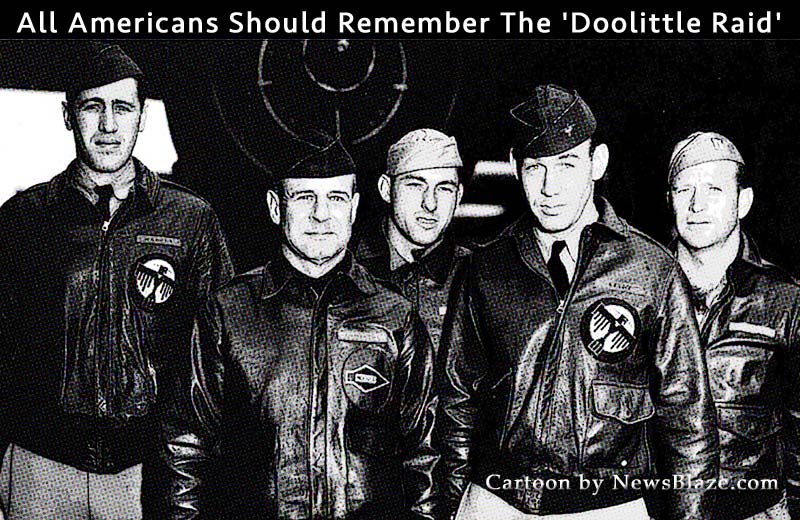 Speaking to reporters at the American Veterans Center in 2014, Cole said, “How we were selected to go on that raid I don’t know.”

In actuality, the raid itself was considered a suicide mission for the all-volunteer crews involved. It encompassed 16 bombers with 80 men on board taking off from the aircraft carrier USS Hornet, 650 miles east of Japan, to bomb Tokyo and break the will of the Japanese.

These incredibly brave men flew their B-25 Mitchell bombers without fighter escort. They had trained for months in the modified bombers to take off on the short, pitching flight deck of the Hornet. Such bombers usually take about 3,000 feet of runway to take off on land, but on the aircraft carrier deck, all they had was 500 feet.

To make things worse for the raiders, Japanese fishing boats in the area had spotted the task force hundreds of miles short of their planned take-off positions. Not knowing if the fishermen had radioed their position, the guns of the ship sank them and the order was given to take off immediately.

Knowing they would most likely not have sufficient fuel to reach the secured landing fields in China, the men flew on to their Tokyo bombing targets realizing their chances to survive had been further depleted.

The bombings inflicted little collateral damage, but the raid became a huge morale booster to all Americans who had suffered through one defeat after another since Pearl Harbor. That mission alone, with those 80 men, changed the course of the war.

The final outcome was three Doolittle Raiders were killed. Eight were captured by the Japanese. Four survived years of solitary confinement. All but one of the bombers crash-landed in China. Ironically, the raiders assumed they would be court-martialed, not honored.

How wrong they were. Cole termed his co-pilot designation with Doolittle as “fate.” He said, “It was strictly by luck, the 17th group got transferred to Columbia, SC. They had put a note up on the board wanting volunteers for a dangerous nation. I had to put my name there.”

From that day on, the Doolittle Raiders agreed to meet every year until the last man was alive. But as it unfolded through the decades, in 2013, they uncorked a bottle of vintage cognac from 1896, the year of Doolittle’s birth, for a final toast.

Where do such men come from? In a difficult time for our nation, it is vitally important to look back at the heroism of these brave men and the sacrifices they made, along with millions of others, to preserve America’s freedom.

Lt. Col. Richard Cole will be buried at Arlington National Cemetery if Congress intervenes, according to officials. It should be noted that three years ago the Air Force said it would name its new B-21 bomber, ‘The Raider,’ in honor of the legendary Doolittle Raiders.

The most realistic account of that historic raid was the MGM classic, “30 Seconds Over Tokyo” (1944), starring Spencer Tracy as Jimmy Doolittle.