Nashville recording artist and Altoona native Ricky Lee and his band “The Mustangs” will perform a concert at the Altoona Jaffa Shrine on Saturday, April 29th. 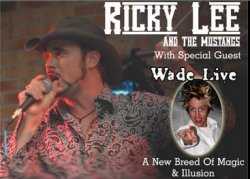 The concert is to honor all troops and filmed live to be sent to our troops overseas. Footage from the show will be used in Ricky’s first music video “She’s an American Soldier.” Everyone who attends the show will receive a free handheld flag for participation in flag waving ceremonies during the concert. Students from the Hollidaysburg Area School District elementary chorus will perform during Ricky’s patriotic song “A Soldier Like You.” All students are invited to participate with Ricky in a special “Salute to our Troops.”

The talk show “Talking with Heroes” out of Fort Carson in Colorado Springs, Colorado will broadcast live from Ricky’s concert. During the talk show they will be interviewing some of the local soldiers that have returned home from overseas to share their stories. The concert will also be recorded live and will broadcast on Internet Radio for viewing by the troops world-wide.

Opening Ricky’s show on the 29th will be illusionist Wade Live “A new breed of Magic and Illusion” from New York. You don’t want to miss this magical special effects show! For more information on Wade Live.

For additional information, go to www.rickyleemusic.com.