At the beginning of November, President Obama is to receive Nouri Al-Maliki, ostensibly the Prime Minister of a sovereign and democratic Iraq, at the White House.

The President would do well to listen to the voices, including many of the great names (1) of the last 4 US administrations( 2), that speak (3) a different truth (4) about Al-Maliki and the many atrocities perpetrated by him as a willing consort of the Iranian regime.

Slaughter Of Unarmed Men And Women In Iraq, By Iraq 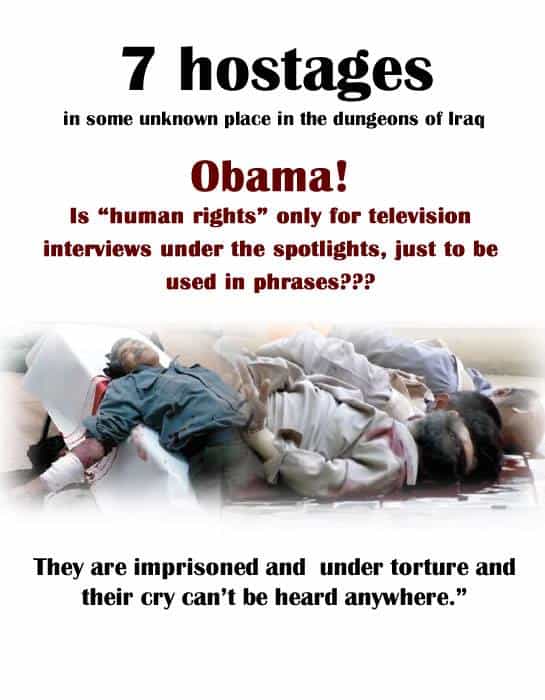 Of special and immediate concern is the 1 September slaughter of 52 (5) unarmed Iranian men and women, members of the main democratic opposition to the Iranian regime, in Ashraf, their exile home in Iraq since 1986, and the abduction of 7 people, 6 of them women.

As Protected Persons under the 4th Geneva Convention since the Iraqi Freedom War of 2003, and recognized as official asylum seekers by the United Nations High Commission for Refugees (UNHCR), the safety and well-being of the Iranian exiles in Iraq is guaranteed by humanitarian and International Law.

Despite this, after the transfer of responsibilities from the US to Nouri Al-Maliki’s Iraqi government in January 2009, Ashraf was fatally attacked twice by his forces, in July 2009 and April 2011, with 47 killed and hundreds injured.

During 2012, most of the 3,200 Ashrafis were duped into relocating to the disused US army base, Camp Liberty, which has, in February and June 2013, been the target of two fatal rocket attacks, leaving another 10 dead and dozens more injured.

The 52 killed and 7 abducted (6) on 1 September were part of just 100 who had stayed on in Ashraf, by legal agreement between the US, UN, Government of Iraq and the residents themselves, to dispose of their assets.

Four things are clear as a result of this latest appalling crime against humanity, of which President Obama would be wise to take note.

First, the International community, especially in the US, who support the Ashrafis and their goal of secular democracy for Iran, feel betrayed by the US State Department and shamed by the part they themselves played in creating the conditions for this pogrom, by trusting the word of their government. They are united and will not be silenced.

In Paris on 19 October, Ed Rendell, (7) former US Governor of Pennsylvania, spoke for all of them when he voiced his shame “because the US State Department enlisted myself and other Americans, attorney generals, judges, FBI directors, CIA directors, governors, heads of political parties, generals who served in Iraq and know MEK well, they enlisted all of us in order to persuade Madame Rajavi and the people of Camp Ashraf, to move to Camp Liberty,” telling them that Liberty “would be a temporary transit location and people will be emigrated out of Iraq in short order” and that the people in Camp Liberty and remaining in Ashraf would be “safe and secure.”

And then, as the sickening truth dawned. “The word was given to us and we conveyed a message that turned out not to be true, and we are complicit to what has happened.”

US Government Impotent Or Ignorant Or Both

Second, while the video footage of the 1 September attack shows highly trained forces entering Ashraf with intent to kill, and the Iranian regime celebrates their most important victory over the “monafeqhin” (hypocrites) as they at last achieve their goal of closing down Ashraf, for years a thorn in their side as a bastion of hope against oppression, Nouri Al-Maliki persists in denying any involvement with the attack and the United Nations and Western governments justify their continued inaction by their “uncertainty about the events of that day.”

The International supporters of the Ashrafis do not share their uncertainty. Many of them have been there on the ground in Iraq and they know.

At the same 19 October conference in Paris, Colonel Wesley Martin (Ret’d), the first commander of Ashraf in 2003, dismisses State Department claims that it has no evidence that Baghdad was involved. “There is no way anybody could come in or leave without engagement of the Iraqi forces. The State Department needs to [face] the reality that it was an Iraqi assault.”

And Tahar Boumedra (8), former UN Head of Human Rights in Iraq, who carried out the fact finding missions in Ashraf after the 2009 and 2011 attacks, speaks every bit as authoritatively about where responsibility lies. In the Council of Europe on 30 September he said “there is no possibility for the government of Iraq to say that it doesn’t know what happened. I could tell you that they do know and they did it.” He also states quite clearly that “the USA and all the embassies in Baghdad, also know the details of what happened. Keeping this quiet is covering up a crime against humanity.”

Third, the evidence of Iraqi parliamentarians, excluded from any control over events because Al-Maliki runs everything himself out of the Prime Minister’s office, casts aside any doubt as to the standing of Al-Maliki and the true measure of democracy in Iraq. In supporting the people of Ashraf they are struggling to open the eyes of the world to the parlous state of affairs in their own country.

“It is no secret anymore that Iraq is now held hostage by the current Prime Minister Nouri Al-Maliki and his ruling party. Our experience with this government has dashed all hopes that Iraq will become a fully functioning democracy based on the rule of law.”

“As for the country’s sovereignty, Iraq has completely fallen under the grip of Iran and follows its instructions and takes them as orders. A clear-cut example of this in the way the Iraqi government deals with the unarmed Iranian exile dissidents who are supposed to be protected by International law. They were under several attacks by the Iraqi security forces killing a hundred and injuries likewise. This happened in complete violation of international law. Iraq has no interest, but the main objective is to satisfy Iran.”

Fourth, the ordinary people of the world are increasingly witness to these statements and admissions by people who were there and know the truth and have the courage to tell it. There are many pernicious myths that abound about the people of Ashraf, their history and their objectives, but they will be rooted out by the clear and lucid truth.

US Credibility At Stake

And so President Obama should consider very carefully the credibility of the United States government and the possibility that Western democracy itself hangs in the balance awaiting the outcome of his decisions at this time.

Halloween is approaching. Iranians in 5 countries have staged a hunger strike protest for the past 60 days. In this campaign they are demanding the White House stop aid to the Maliki regime in Iraq and refuse his presence at the White house unless his regime sets the 7 host6ages free. Maliki has been trying hard to please Tehran by abducting 6 women and a man member of the PMOI in order to deliver the dissidents to the Iranian butchers, where they will face horrendous torture. Maliki has so far denied the whereabouts of the hostages. The NCRI – National Council of resistance of Iran has in numerous press releases disclosed detailed information of the devastating situation of the hostages and their whereabouts demanding for Justice.

Nouri Al-Maliki should not be allowed to set foot on American soil until, as a minimum, the hostages have been released and UN peace keeping forces installed in Camp Liberty for the protection of the remaining 3,000+ men and women.

If he will not comply, then military and financial aid to Iraq should be suspended until he does. As Michael Mukasey, former attorney-general, said in Congress earlier this month about the Ashrafis. “We’ve stood by and watched as those people have been systematically slaughtered by Iraqi troops using weapons and equipment supplied by the United States and training by the United States.”

Obama should listen to this and take action. Silence is not an option.