WINDSOR – The Little Caesars Pizza Bowl is adding some international flavor this year. Ken Hoffman, the Executive Director of the LCPB, is reaching out to Canadians to join the festivities. In celebration of Boxing Day, Windsor, Ontario songstress, Magda Kaminski will sing the Canadian National Anthem at the Holiday football event on December 26, 2013 at Ford Field. Kaminski, who is bilingual, is an award winning recording artist. She recently received another industry accolade from the Indie Music Association in California.

Kyle Hacias, speaking for the Little Caesars Pizza Bowl, made the announcement regarding Kaminski at the Biz-X Magazine Holiday Party at the Ambassador Golf Club in Essex County, Ontario. “Detroit is so networked to Europe and around the world. The Little Caesars Pizza Bowl is truly global now with our television coverage and radio network. We will even have a special feature in rotation on the Armed Forces Network, Hacias said.” www.netlink.com

This is just another way that the Little Caesars Pizza Bowl is celebrating the rich history between Windsor and Detroit sports. The Bowl has a great match-up this year. The champions from the Mid-American Conference, Bowling Green State, and the Pitt Panthers (6-6) will square off. Pitt had quality wins over Bowl bound Notre Dame and Duke and is the first Atlantic Coast Conference team to play in the LCPB.

Edward Gleich, Little Caesar Enterprises Sr. V.P. of Global Marketing, outlined some of the added value events that are going on alongside of this, the 17th annual Little Caesars Pizza Bowl. Besides the enrichment tours, museum walks and bowling events, Gleich announced that two new homes will be given to army veterans at half-time of the LCPB game. He also said the Little Caesars Pizza Kitchens will make appearances in Bowling Green, Ohio and Pittsburg, Pennsylvania to provide holiday meals for people in need. www.littlecaesarspizzabowl.com

The LCPB events are a celebration of excellence for the teams involved. Host hotels for the participating schools will be the Motor City Casino & Hotel and the Detroit Westin on Washington Blvd. Hoffman, who also coordinated the former International Bowl in Toronto, added at the kick-off coach’s press conference, “We hope Ford Field is the Boxing Day destination after some Detroit shopping and holiday fun. You will also be able to get a sneak peak at the outdoor ice rink going up inside of Comerica Park for the New Year’s Eve game between the Detroit Red Wings Alumni and the Toronto Maple Leafs Alumni.”

The Bowl Committee also released artwork for the new collector’s pin that will be offered at the game. “Plan to come early and stay late,” added Hoffman with a smile. 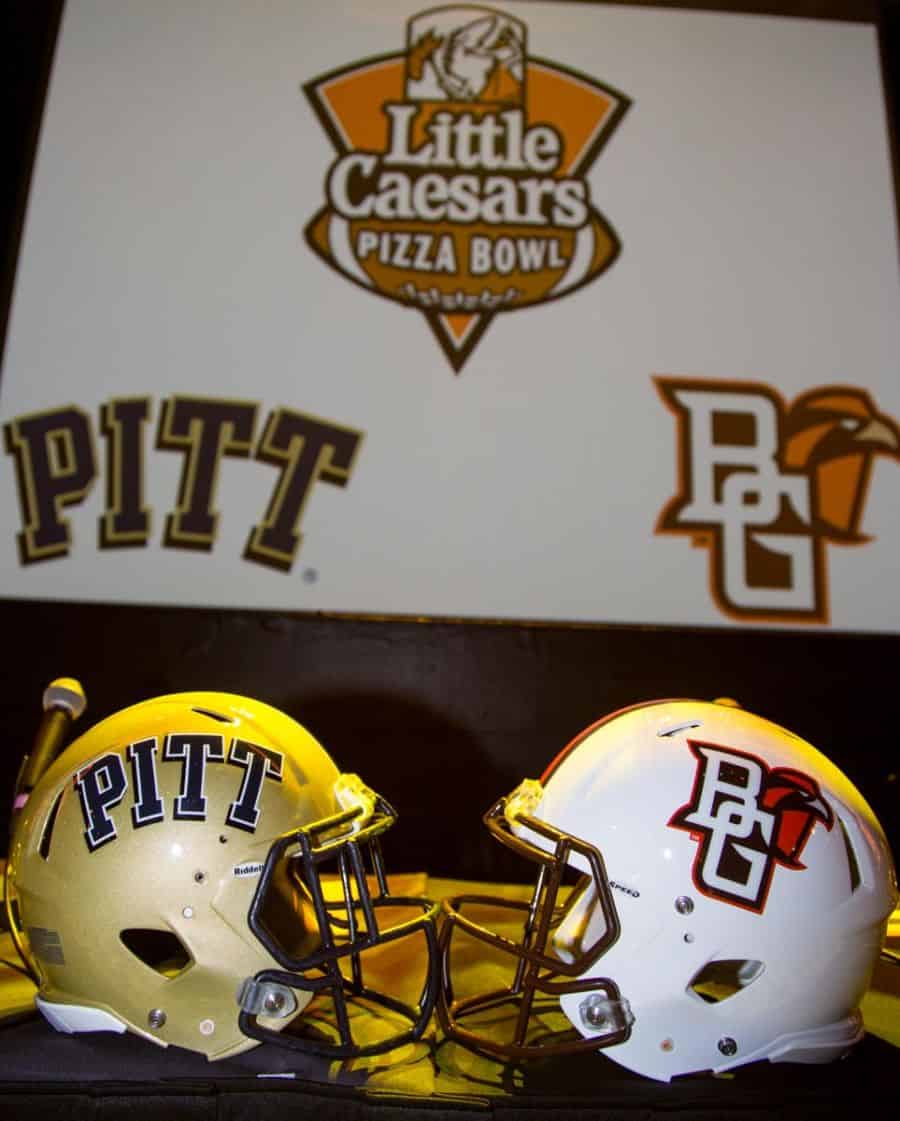 “We’re excited for the chance to play in another game against such a quality opponent,” said Pitt head coach Paul Chryst. “Bowling Green was impressive not only in their MAC Championship win, but all season long and we have a competitive game of football ahead. We are grateful to the Little Caesars Pizza Bowl and the City of Detroit for offering us this opportunity.”

The Bowling Green offensive line will have to contend with Pitt’s Aaron Donald. The standout senior defensive tackle for the Panthers added another award to his resume. Donald was awarded the 2013 Bronko Nagurski Trophy, which is given to the “nation’s most outstanding defensive player.”

A pregame LCPB party will be hosted at Bookies Bar and Grill at 2208 Cass Avenue, Detroit, from 2:00 p.m. until 5:00 p.m. Special guest will be Philadelphia native son and football pioneer, Wally Triplett. Drink and food specials will be offered. www.bookiesbar.com