Hawija, Iraq – Today, for the first time in years, members of the Kirkuk Provincial Council met with representatives from their Hawija district at the Hawija City Council Building. 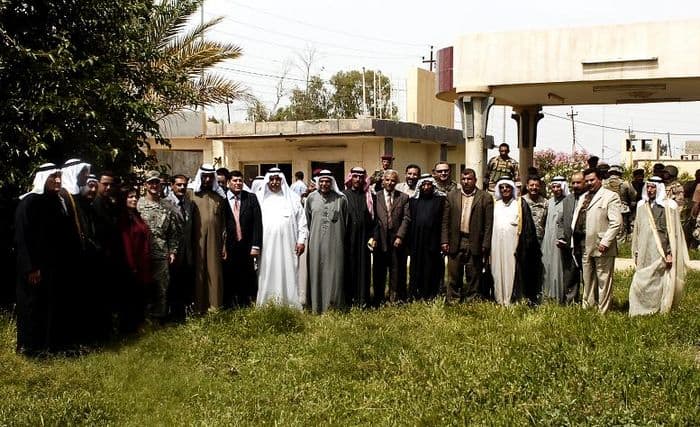 This meeting in the city of Hawija was made possible due to the combined security measures taken by the Iraqi Police, the Iraqi Army and coalition forces.

“Today’s security has Iraqi Army traffic control points; it has Iraqi Police check points throughout town with roving patrols, including our forces,” said Maj. Kelly D. Kendrick, a native of Searty, Ark., and operations officer for 1st Battalion, 327th Infantry, 1st Brigade Combat Team, 101st Airborne Division. “The Iraqis have taken the lead on security inside their own area to make sure the meeting is safe.”

During the meeting, Rizgar Ali, Kirkuk’s Provincial Council president, along with five other council members, held an open forum in which council members from the Hawija district could air problems facing their constituents; issues such as irrigation, security, lack of fuel and unemployment.

Toward the conclusion of the meeting, Ali addressed each issue and offered help where the council could.

“Now that we have had this moment and this chance to meet, I am sure that my colleagues would agree that we will be able to listen, cooperate and collaborate with each other,” Ali said.

“We hope to serve Hawija the best because Hawija is part of the Kirkuk province and it is our duty as officials to make sure that every province, including Hawija, is served a better way.”

Ali said the meeting came to fruition due to the efforts of Col. David R. Gray, the commander of 1st Brigade Combat Team, 101st Airborne Division.

“We had suggested to the leadership of the 1st Brigade and the coalition forces, we encouraged them to arrange for this meeting in Hawija,” Ali said. “In turn, we thank their efforts for providing this meeting today and making it possible.”

Gray, who attended the meeting, said he felt positive about the results of this first meeting.

“The Kirkuk council members got a birds-eye view of what the conditions are like in Hawija so they can better understand what the Hawija district representatives are saying to them,” Gray said.

“This is a great step forward for them [Kirkuk officials] to recognize that the province of Kirkuk involves more than the city of Kirkuk and now they clearly understand. Now, what remains to be seen is what actually comes out of listening to these leaders.”

Gray advised those who attended the meeting that one of the first steps is to improve security in Hawija so construction efforts can begin.

“Local leaders, and the Provincial Council who represent the western part of the Kirkuk province, are always talking about not having enough money for projects,” Gray said.

Monies for projects in the district do exist, but the projects have not come to fruition largely due to the security situation not being stable enough for contractors to want to come to Hawija to perform services and continue those services.

“Right now, we are initiating 15 quick impact projects to help in such areas as sanitation and a number of water projects,” Gray said. “Those contracts have been approved and work has begun.

“That is a simultaneous attack on the problem of security by increasing our operations and budgets. By that ‘our,’ I mean Iraqi security forces buttressed by coalition forces. I also mean attacking the problem by applying monies and employment, we keep idle hands from evil deeds.”

Today’s meeting in Hawija represented a positive step forward in the district on two fronts. First, because of the combined security efforts between the IA, IP and coalition forces, the meeting took place without incident. Second, and most importantly, it solidified the lines of government in the northern-eastern part of Iraq as two key governmental bodies, once drawn by ethnic lines, met to discuss how to improve the quality of life for their people … the people of Iraq.