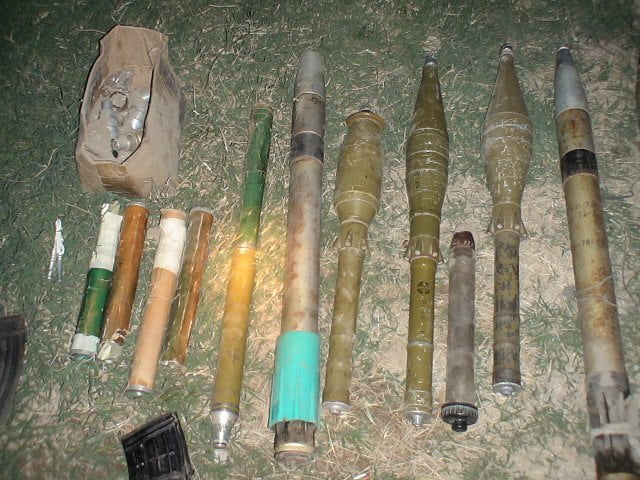 RAMADI, IRAQ – Iraqi Army Soldiers assigned to the 1st Battalion 1st Brigade 7th Division of the 2nd Brigade Combat Team/28th Infantry Division (2/28 BCT), discovered “The largest cache found, by an Iraqi Army Company, in Ramadi, Iraq.” The cache was discovered while conducting a targeted Counter Insurgency Operation (COIN) in the Tammim area of western Ramadi, on the evening of March 30, 2006.

The targeted raid was based on intelligence gathered from information provided by Iraqi citizens. The 1-1-7 Iraqi Army Soldiers conducted the targeted operation on a specific house which harbored the cache. The counter insurgency operation focused on searching the house and confiscating weapons and IED making materials. The objective of the mission was to disrupt the insurgent’s logistical base, in order to limit their ability to emplace IEDs, and conduct indirect fire attacks against innocent Iraqi civilians, Iraqi Security Forces and Coalition Forces.

Once the house and surrounding area had been cleared, the 1-1-7 IA Soldiers began a complete search of the property. The IA Soldiers discovered portions of the cache hidden throughout the inside of the house, and hidden in the backyard. The cache consisted of: sniper rifles, numerous rockets and rocket launchers, multiple hand grenades, RPGs, loaded weapons magazines, numerous artillery rounds, an assortment of propellants, and bomb and IED making materials. Additionally, the IA Soldiers removed a completed suicide vest that was fully armed with explosives and ready to be used in a terrorist attack. 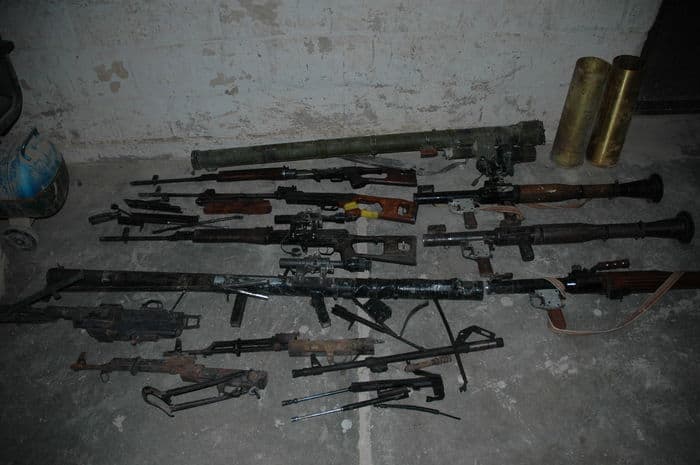 Lt. Ali, Commander, Company 2, 1-1-7 IA expressed pride and admiration for the courage and dedication displayed by his Soldiers during the counter insurgency operation. “I’m proud of the tremendous progress that has been made by the Iraqi Army. My Soldiers continue to stay focused on the mission. This cache find will certainly hurt the efforts of insurgents operating in our area,” said Lt. Ali.

Insurgents operating in the Tammim area of Ramadi continue to endanger the local Iraqi civilians through murder and intimidation tactics. Insurgents linked to Al Qaida in Iraq; (AQIZ) cell (part of the Abu Musab AL Zarqawi network in Al Anbar), have vowed to disrupt the newly elected democratic process by intimidating the innocent citizens of Ramadi.

“The 1-1-7 IA Battalion was formed just 9 months ago, and has progressed to where they are now working independently in the Tammim and 5 Kilo area of Ramadi. The Iraqi Army Soldiers are disciplined and determined to rid their country of insurgents. I am very proud of the work that this battalion has done, and with the progress they have made,” said Colonel Regis A. Cardiff, the Deputy Commander of the 2/28 BCT.

The Iraqi Army Soldiers of Company 2, 1-1-7 are proud to report that there were no injuries or equipment damages during this successful counter insurgency operation.