One of America’s top military commanders in Afghanistan poked fun at colleagues, Obama administration, through an interview.

The mistake McChrystal made was “profound” according to White House press secretary, Robert Gates.

McChrystal and staff thought of ways to dismiss Vice President Joe Biden using a one line prepared answer for the interview, writer Michael Hastings. He tired of questions about Vice President Biden.

“‘Are you asking about Vice President Biden,’ McChrystal says with a laugh. ‘Who’s that?'”

McChrystal’s first meeting with Obama “was a 10 minute photo op,” Hastings wrote. “Obama clearly didn’t know anything about him, who he was. Here’s the guy who’s going to run his f-ing war, but he didn’t seem very engaged.” McChrystal’s quoted answer.

The article points-out how McChrystal angered practically everyone with a stake in the conflict including United States Ambassador Karl Elkenberry. 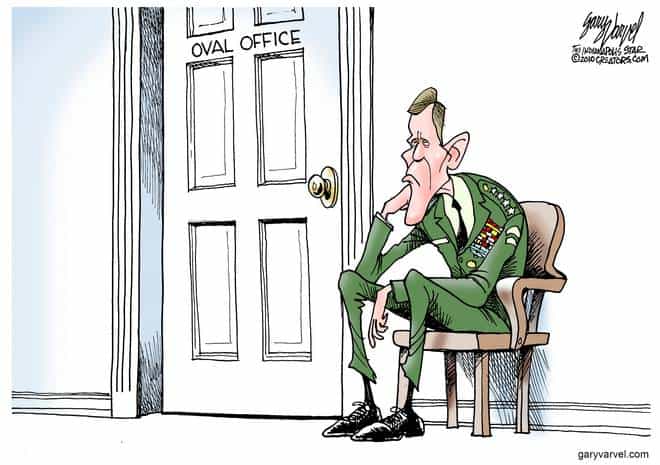 Both Democrats and Republicans have been strongly critical of McChrystal after the story was published.

Committee chairman David Obey, Democrat-Wisconsin, called McChrystal the latest in a “long list of reckless, renegade generals who haven’t seemed to understand that their role is to implement policy, not design it.” Senators Lindsey Graham of South Carolina, Joe Lieberman of Connecticut and Jim Webb of Virginia strongly disagree with McChrystal’s comments.

President Obama talked about McChrystal in a Cabinet meeting Tuesday, but a decision about McChrystal’s fate hasn’t been decided. “I extend my sincerest apology for this profile. It was a mistake reflecting poor judgment and should never have happened,” McChrystal explained in a Pentagon statement.