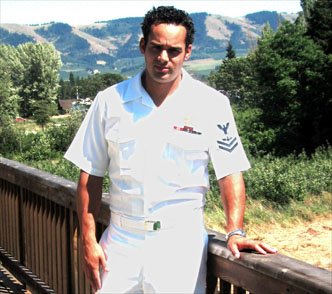 I began my morning with my normal routine of making a pot of coffee and turning on FOX news to see the day’s issues. This morning President Bush was addressing this nation and remembering the sacrifices and the successes that this nation has experienced for the past five years since the War on Terror began in Iraq.

I remember that day well and knew this would be a very personal war to me. My oldest son Kristofer was one of “The few, the proud, the Marines.” My son-in-law Christopher was an Officer serving in the Army and was already on his way to Iraq, my youngest son Marc was in BUDS training to become a Navy SEAL, my brother Jim was in the Air Force Reserves and I had a cousin who was an Officer in the Marines. I had no idea at that point how personal and emotional this war would be.

My daughter-in-law, Maya, had recently shipped Marc’s uniforms to me. I’ve just picked them up off of the bed to hang them in the closet. As I pick it up the tears began to stream down my cheeks as I think of the Hero, my son, who wore it. I bring it close to my nose and take a deep breath hoping that by some odd chance I can still catch a hint of his smell on the garment. My mind wanders as I remember the tall, dark and very handsome young man who was the youngest of my 3 children, my baby, who filled this uniform so well.

Marc Alan Lee was the first Navy SEAL killed in Iraq 8-2-06. He was one of the sacrifices that the President had talked about this morning as he addressed the nation. I personally know the cost and pain of war and yet still believe the war is worth fighting, the War is worth winning.

That extremely hot August day in 2006, Marc was wearing a different uniform than the one I’m holding. He had his desert cammies on along with well over 150 lbs of gear and ammunition. He was the big gunner for his platoon and his teammates retold the stories of how he carried the M60 without a sling. They had never seen anything like that and were amazed at his strength.

They were in the biggest battle since the war began and had been in the firefight for 2 hours when Marc single handedly stood up in the direct line of fire and shot off over 100 rounds of ammunition. Three times that day Marc would stand out in the direct line of fire to defend his buddies, for you, for me, for this nation. Marc was a young man who selflessly gave his life because he valued others lives more important than his own.

I look at this uniform flat, lying there on my lap, empty. The fabric isn’t anything special, what made it special was the hero who filled it. He filled it with determination, humor, love, commitment, courage, faith, and hope. No one could ever fill this uniform like he did. It is a reminder of who he was. I will display it in my “Heroes” room, to pay tribute and honor Marc. As a Mother I am so proud of Marc’s sacrifice that he gave in Ramadi. He was one of those who made Al Anbar province one of the success stories of the War on Terror.

Where do we get such brave men to fill these uniforms? Marc’s name means “Mighty Warrior” and God designs each one of us for a certain purpose and to wear a specific uniform. Our men and women in the Armed forces are designed that way. Each one of my family members who served filled their uniforms in their own unique ways, yet the character qualities duplicated themselves, honor, courage, determination, commitment, love, faith, hope.

Each one of them started fulfilling their calling by entering a recruiting office. Their recruiters coached and counseled them to accomplish their goals and dreams. It is appalling to me to watch the news as the anti-war, anti-American crowd continues to attack these recruiting offices. I was just in DC last week with Move America Forward to release our “Sedition Report” that reveals a pattern of bombings, broken windows, shootings, and destruction of recruiting offices in over 42 cities. The report can be viewed at MoveAmericaForward.org.

It angers and repulses me that these hateful, violent, aggressive “peace activists” continue to say they support the troops. If this is how they “Support them,” I would hate to see their actions if they didn’t! They continue to tell us that our troops are liars, murderers, and rapists. How dare they dishonor my son’s name or his memory by telling their lies to accomplish their agenda for the war.

I was embedded with the 1-4 CAV in Iraq at Christmas and I saw our troops fill their uniforms with the same brave, courageous, noble professionalism that both my sons Marc and Kristofer did. I am proud of the character they displayed and the determination they showed. Their voices echoed over and over that this war is worth fighting and it is winnable.

As a Navy SEAL, Marc endured the notorious “Hell week” and trained intensely for 2 years before he was deployed. When I met with President Bush he said the SEALS were “the elite of the elite.” It is the unique individual who can survive the intense training to become a SEAL and wear the uniform. The preparation is intense and much is required from them. Marc was ready, trained and prepared to fill the uniform and accomplish what was required of him when he deployed to Iraq. His instructors knew that, his Officers new that, his teammates knew that, I knew that and God knew that.

I know the day that he left this earth he was escorted into Heaven by the Angels, and I will see him again. I also know that I have a uniform that I must fill. It’s different than Marc’s yet I am also called to be a warrior in another battle. Just as Marc was prepared by the intense training for the battles that lie ahead, God has also prepared me. The previous struggles and trials of life had convinced me that I didn’t have the strength in myself to succeed. God had proved his character over and over to me during the “Hell weeks” of life, and I knew he was my strength and that he had trained and equipped me to succeed in the battle of grief.

Just as this past 5 years in Iraq we have seen sacrifice and we have seen successes. Life is the same way, but we must remember that it’s worth fighting for and worth winning.

Please, as we reflect today on the 5th anniversary of the War on Terror, join with me to honor Marc and all of those sons and daughters, husbands and wives, who have given the ultimate sacrifice, and their families. They stood to the end for their brothers at arms, will you stand with me and carry on and fight for those who continue to serve and for this country?

Tomorrow would have been Marc’s 30th Birthday. Just before Marc deployed to Iraq he came home for his 28th Birthday and we celebrated at the Royals/White Sox Spring training game. After the 7th inning the reader board displayed my wishes to him “Happy 28th Birthday Marc. Have a safe deployment. Love Mom!” I was asked to throw out the first ball at the Royal’s/Brewer’s game in his honor. I will be celebrating tomorrow the amazing kid who filled that Hero’s uniform with all that he was. I know that if he could, he would send me a message on the reader board saying, “I love you Mom, have a safe deployment.”