President Obama entered the congress this evening, to resounding applause. He opened his Healthcare speech talking about the economy. He said “I will not let up until those Americans who seek jobs can find them, until those businesses that seek capital and credit can thrive; until all responsible homeowners can stay in their homes.”

Addressing the joint session of Congress, the President talked about his plan for health insurance reform, urging to Congress to pass the legislation. He said “I am not the first President to take up this cause, (healthcare) but I am determined to be the last.”

Apparently, over the last three years, 12 million people were denied coverage directly – or indirectly, by raised premiums – due to a pre-existing condition. The President said 14,000 Americans lose their coverage every day and his plan will make it illegal for insurance companies to deny coverage for health reasons or risks.

The President said “That is heartbreaking and wrong, and no-one should be treated that way in the United States of America.”

Insurance companies will be prevented from rescinding coverage already purchased, except in cases of fraud.

A recent Congressional investigation found that over five years, three large insurance companies cancelled coverage for 20,000 people, saving them from paying $300 million in medical claims – $300 million that became either an obligation for the patient’s family or bad debt for doctors and hospitals.

In the plan, out-of-pocket expenses would be capped and insurance companies prohibited from imposing annual or lifetime caps on benefit payments.

Preventive care, such as mammograms and check-ups, would be included in health plans, to identify health problems early when they can be most effectively treated.

24 percent of women age 40 and over did not have a mammogram in the past two years, and 38 percent of adults age 50 and over have never had a colon cancer screening.

The President cited a problem with Medicare drug benefits, that is a problem for seniors who end up paying large out-of-pocket expenses on brand-name prescription drugs. Under his plan, a 50% discount would apply immediately, with complete coverage phasing in over 10 years.

In 2007, over 8 million seniors hit this coverage gap in the standard Medicare drug benefit. By 2019, the President’s plan will completely close the “donut hole.” The average out-of-pocket spending for such beneficiaries who lack another source of insurance is $4,080.

For Those With No Insurance

The President offered a big stick for companies that do not contribute.

Large businesses, defined as those with more than 50 workers, will be required to offer their workers coverage or pay a fee to help cover the cost of making coverage affordable in the exchange. This will ensure that workers in firms not offering coverage will have affordable coverage options for themselves and their families.

Individuals will be required to carry insurance and businesses “must chip in to cover the costs,” but he said small businesses with small margins would be exempt. When he said “There remain a few details to be worked out,” there was laughter.

The left wants a single payer system handled by the government and the right wants to take the obligation away from employers, but President Obama says he wants to fix the system we have, rather than invent something completely new, that has no chance of being implemented.

He even included an idea from John McCain’s presidential campaign, of helping people who would otherwise be bankrupted by health costs.

For those Americans who can’t get insurance today because they have preexisting medical conditions, we will immediately offer low-cost coverage that will protect you against financial ruin if you become seriously ill. This was a good idea when Senator John McCain proposed it in the campaign, it’s a good idea now, and we should all embrace it.

President Obama moved to address key controversies, including the bogus claims of planned death panels. He said this was cynical, irresponsible and a lie, as was illegal immigrant coverage, and there would be no federal dollars for abortions. He also said no bureaucrat will get between Americans and their health.

The President said the guiding principle is that consumers do better when there is choice and competition. In 34 states, there is little competition, because 75% of the people are covered by 5 or 6 major health companies. In Alabama, one insurance company controls 75% of the market.

“I have no interest in putting insurance companies out of business I just want to hold them accountable.”

The public option is for those who don’t have insurance. This insurance would have to be self sufficient, keep down salaries and other overheads, and fund itself.

President Obama offered to work with the Congress to address any concerns.

The President promised he would not sign a plan that ads 1 dime to the deficit now or in the future and said a provision in the plan would generate cuts if the planned savings do not materialize.

He said most of this plan can be paid for with savings in the existing system and the medicare trust fund will not pay for this plan.

“I will protect medicare.”

With a cynical nod to republicans, he said “Republicans have long insisted reforming medical malpractice laws can bring down the cost of healthcare,” adding “Malpractice may be contributing to healthcare costs,” but he didn’t sound convinced of what he said.

Acknowledging that the Bush administration had one good idea, President Obama said “medical malpractice demonstration projects,” would be implemented.

Cost of the Plan

The cost of the plan is estimated at $900Bn over 10 years, less than tax cuts for “the wealthiest americans,” and less than the Iraq war.

Saying he would seek common ground in the weeks ahead, and that his door is always open, he cautioned that he will not waste time with those who have decided it is politically better to kill this plan than to approve it.

After the speech, Communications Director Anita Dunn answered a few questions sent to the whitehouse via twitter and facebook. On the question of coverage for illegal immigrants, she unfortunately had no answer as to how illegal immigrants would be prevented accessing the system, other than by the use of social security numbers, which are known to be unsed fraudulently.

The President offered Carrots to Insurance Companies, Businesses and individuals, sticks for companies that don’t provide insurance for their employees, and a half-hearted stick against malpractice lawyers. There were kudos for John McCain and one for George Bush, although it was half-hearted, and there were plenty of pointed fingers for Bush, republicans and insurance companies.

The most surprising part of the speech had nothing to do with healthcare. It was the reference to “responsible homeowners” meaning there must be some “irresponsible homeowners” out there somewhere. Other surprising things were the lack of a mention of lifting barriers to interstate commerce for insurance companies, that would initiate competition; and several references to the Bush administration having caused all economic troubles, despite Democrat control over the Congress, of which he was a member.

The healthcare system has many shortcomings that should be addressed. Most of the President’s plan looks good on paper. The problem is that Congress could cause many problems, given their bill-writing skills and procedures that allow them to vote on bills stuffed with pork and hidden clauses they haven’t read and don’t understand.

Overall, a speech about important issues, but a disappointing delivery, seemingly designed to tempt those worried about healthcase, alienate republicans and make democrats feel good because they have a President prepared to beat up on their enemies, the Republicans. 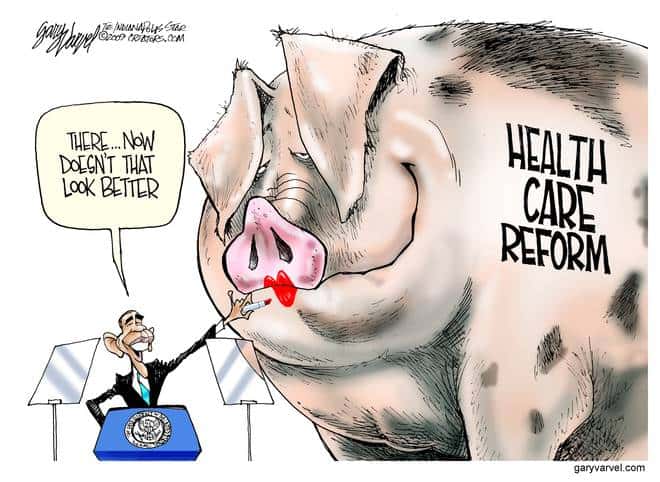