I’ve been staring tirelessly at some of the photos of Bonnie and Clyde, confiscated by the police after the legendary outlaws hightailed it out of their Joplin, Missouri hideout. Well, I don’t want to add to the already existing cornucopia of misinformation about them, so I must point out, the Joplin police first got a hold of their camera (left behind), then developed the film that remained in the camera. Law enforcement gave it to the The Joplin Globe and the newspaper published these near-perfect photos.

This would include the most famous of bandit pix ever, the ‘cigar smoking gun moll’ shot (excuse my choice of words) and my personal favorite, the two of them together, where you would swear, they were absolutely, ‘madly in love’ with each other. I’m not really all that clear what my purpose is in writing this piece today? If it’s nothing other than to say, the primary evidence (the pristine Joplin photos) clearly proves the troubled and troubling couple literally loved one another, then that should suffice as reason to pen a few words.

Well, bear with me as I struggle with a senior moment of sorts, yet eureka, I do recall what brings this on; that is, the penning of a few lines on the legendary Bonnie and Clyde! Goodness sakes, it’s the RR Auction in Amherst, New Hampshire, which is commencing in full force even as I type. I suspect Bonnie’s Colt .38 revolver will fetch as much as a million dollars, but we’ll have to see. News about the one-of-a-kind auction should be out later today. Exciting, don’t you think?

So it was news of the auction, which I heard about only a few days ago, that propelled me to begin a quest of all things Bonnie and Clyde (this is not the first time this has happened to me). In just two days time, I’ve assembled enough information to write another book on those two (and the Barrow Gang), but that’s not going to transpire, nor should it; no need for redundancy, when a great book has already been published, Go Down Together: The True, Untold Story of Bonnie and Clyde, by Jeff Guinn. Alright, so I ordered it on Amazon this morning, but I’ve skimmed it before in my local bookstore.

Well, I finally realize now what I want to write, that may make an original contribution to an already tangled web of misinformation, blended in with verifiable, factual evidence (historical truth, as it were) about what these Rotten Apples by way of Dallas Star-Crossed-Lovers were up to for several years (here in Texas and elsewhere) in the early 1930s. I mean, it’s not anyone’s fault in particular; I suspect lots of the myth-making boiled over in the public eye even before the bullet-riddled Ford came to complete stop, on an isolated Piney road in Gibsland, Louisiana (where otherwise, no one would have heard of Gibsland at all).

Before I forget, let me give you this quote, since it is applicable to I think I want to tell you. It’s the line from The Man Who Shot Liberty Valance, where the newspaper man who learns the truth about how Valance was killed, states with utmost profundity: “This is the West, sir. When the legend becomes fact, print the legend.” This is how I learned about Bonnie and Clyde when I was young; from reading distorted pulp histories lacking sources. But mostly I soaked up the ill-fated twosome’s story from watching the 1967 movie, Bonnie and Clyde, directed by Arthur Penn, and starring Warren Beatty and Faye Dunaway (naturally).

Okay, so I had to cue up Lester Flatt and Earl Scruggs’ foot stomper, Foggy Mountain Breakdown, which courses through the movie like a merciless category 5 hurricane. Even the bluegrass masterpiece falls within the spidery web of the aforementioned quote, since it’s a product of a mid-1940s development in music (cornered by Flatt and Scruggs), and thus is a malapropism in a Flower-Power-esque movie, of (mostly) Warren Beatty, who made millions of dollars in royalties, because of a bad call by Warner Brothers. And yet ironically, no better ditty could possibly ‘ave been chosen. The rippling banjo riffs are like Browning automatic machine-gun bullet volleys!

So really, it’s the movie that got me so mixed up about how Bonnie and Clyde’s ‘real tale’ went down. The film was released on August 13, 1967 and I had the good fortune to view it around that time at the historic Majestic Theatre in Dallas, Texas. Watching the movie at this frothy Old-Timey cinema house may have contributed to my taking in of the hopelessly, mythological rendering of information, so thoroughly inundated with conviction (as I was) that this was the real deal, the dogma-scoop on what occurred to two backward, impressionable young people, in bad need of a lonesome buck somewhere in West Dallas.

Yea, I soaked it in the spiel as the gospel truth (like a tattered sponge), and remained in blissful ignorance for many years to come, thinking C.W. Moss was a real accomplice of B & C. Okay, so I always believed that Clyde had got it after exiting the Ford, as he approached a fake tiring changing Ivan Moss (Dub Taylor), who had set up the poor couple of crooks (though greatly loved by the common people). Now we know, it was really Henry Methvin’s daddy, Ivy Methvin, who turned over info to Frank Hamer, and was to the side of the road at the moment they got ambushed (really, murdered by law enforcement). 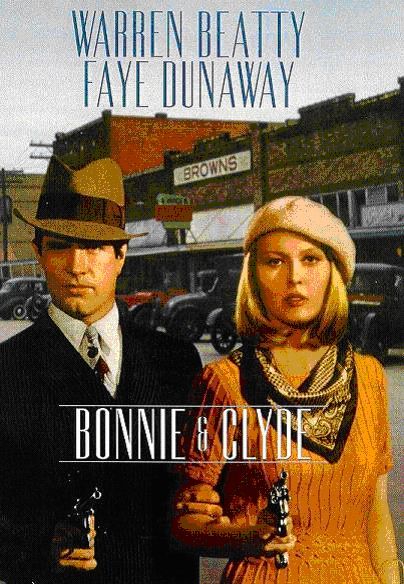 And then there’s the bit about B & C capturing Frank Hamer and photographing him with the duo in mocking poses. It never happened! The first time Hamer saw them in person was at the ‘bullet festival’ at Gibsland. I need not uncover a plethora of faux pas in the true narrative, as provided by the movie, but only to point out why so many of us have been completely in the dark for so many years. But we have so many reliable resources we can look at today, there’s no longer a good excuse for not getting at the truth, the virtual saga of Bonnie and Clyde.

The Wikipedia entry is good, so take a look at it. Then there’s Jeff Guinn’s book, so pick it up. And while I’m thinking of it, The Dallas Municipal Archives has a great collection of Bonnie and Clyde documents (a digital archive on UNT’s Portal to Texas History). One I looked at this morning, is W. D. Jones’ actual confession given to the Dallas police just after his capture in the mid-summer of 1933. W.D. himself had a rough go of it, with drug addition and getting himself murdered in 1974. And don’t forget Ted Hinton’s 16 millimeter film, it tells no lies! Alright, we even have L.J. Hinton’s Bonnie & Clyde Ambush Museum in Gibsland, La.!

Even with all the falsehoods contained in the Beatty/Dunaway movie, we have to admit it’s the popularity of the film that’s responsible for so many people taking an interest in the subject, and this results in a burning passion to seek out the historical truth, as (amazingly) we are able to locate a great quantity of extant, primary records. Another truthful take-away we can get from viewing the movie repeatedly, is the realization of a tremendous level of organized violence (emanating from both the Barrow Gang and law enforcement), marking this as the beginning of a chapter in our history that would stay around up to present times.

Ours is a violent history and Bonnie and Clyde helped to forge this dark persona of (gratuitous) violence! Unwinding how and why this is the case, is part of our job as devoted historians, who are not afraid to face up to what our past tells us, as harsh and stark-naked, riddled with epical examples of large-scale violence as it may be. (All images in Public Domain).