NewsBlaze News
Home Entertainment Music Pink Floyd’s Dark Side of the Moon Is the Past, Present, and...

Without getting bogged down in the morass of data and hair-splitting detail surrounding Pink Floyd’s Concept Rock masterpiece, Dark Side of the Moon (released initially on March 1, 1973), I must insistently ask once again, is this the greatest rock album ever made? The argument, as posed to myself (in the privacy of my own streams of consciousness) is persuasive. Rational analysis, comparisons, and excruciating examination of minute detail in the production of the record, is missing the point.

Just give in, let the stereo imaging bombard your aural senses, accept the stimuli freely, then wait to land on planet earth after a trip to a mostly secluded spot on the moon’s cheesy-textured surface. Alright, so I lied somewhat, I read about and examine meticulously the content and creation of Dark Side all the time.

I’ve been listening to this record for nearly 40 years now, still marveling over mainly the sound quality, but then suddenly I change, the salesman inside of me kicks in, looking over banks of sales data, which assume a metamorphosis even as I type. 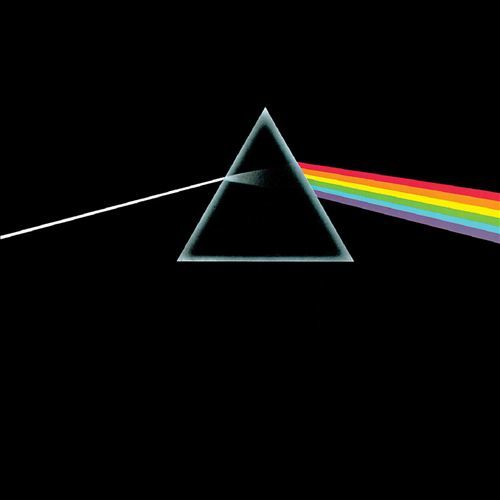 So it’s late Spring 1973, I’m driving around Dallas and Austin in a brand new mocha-toned Camaro, listening to Dark Side in an Eight Track format on my Lear Jet player. I’m not really up to anything in particular other than merely driving anywhere my Camaro takes me, driving endlessly on freeways, smoking lots of pot, then to shopping malls, or over to Hanna’s Pies on Forest Lane, when gripped too badly with the Munchies. Really, what I’m doing, is testing where this Pink Floyd music is taking me. It’s taking me everywhere and nowhere, which is where I want to be.

I wouldn’t recommend looking for a job when your listening to Dark Side; it’s likely you won’t land the position you’re applying for, especially when insisting the assistant manager who’s interviewing you, should listen to David Gilmour’s guitar solo one more time on Money.

So what are the total sales World Wide now? Better than 55 million? I bought a copy on itunes just two weeks ago. Love the digital booklet. So there it is: the line ‘I’ll see you on the dark side of the moon’ comes at the end of Brain Damage (apparently a reference to the deteriorated mental state of Syd Barrett).

Now it’s making much more sense! This is about lunacy, not space travel or cosmic astronomy. This helps to explain my behavior as well, remaining in a catatonic state for months on end, a slave guest of Pink Floyd, who were staying at the Motel Eight Track Machine for a few precious months of my life.

Alright, Eureka again! Now I understand Roger Water’s Time better; it can get away from us, we can never get it back. Do I regret wasting my time stoned, just walking around shopping malls, visiting every conceivable shop under the sun? It’s a two edged sword (always a fit)! I was spellbound!

Pink Floyd did it to me. How did they twist those knobs at Abbey Road? Alan Parsons and Peter James had a lot to do with it. Mix is wet, dripping with reverb! Perfect for the Freaks who would be listening. Record is end over end, one song flows into another, just like a school day: first period, second period, third period, lunch, etc. Just like life too; infancy, childhood, youth years, maturity, then Fossil Land!

Dark Side is a universal expression of what Pink Floyd was up to at that particular point in their charmed lives. And let me put in a good word for technology, meticulous planning and rehearsals, then that EMS VCS 3 (Putney) synthesiser used so keenly by Nick Mason.

The clocks are striking, cash registers are ringing, I have a job finally, and Dark Side has an Eternal Life! I want to be a part of that; maybe I wasn’t wasting my time so badly after all, that drifty, dreamy summer of 1973. *(Have to turn it off for now.)