When the term ‘lost in translation’ is tossed around, that particular dilemma can amount to a whole lot more than just inadequate subtitles in a movie. The German metaphorical Reunificiation thriller, Christian Petzold’s Yella, is more than a case in point. The political nuances of this likewise psychologically dense road movie are so specific to Germany’s recent historical past, that the film – in its own split personality way, along with the schizophrenic tendencies of some of the characters – may very well come off seeming like two entirely different films, depending upon the international zip code of the particular audience.

Nina Hoss is Yella, a morose and ambitious young accountant in contemporary times who makes plans to depart to West Germany from her economically depressed East German town, and from her clinging electrician turned failed entrepreneur estranged husband, Ben (Hinnerk Schonemann). While Ben persistently stalks and occasionally assaults Yella, attempting to force her to stay, the determined woman finalizes an agreement with a prospective West German businessman who turns out to be shady and predatory.

But before arriving in the West, Yella makes an ill-advised, reluctant decision to accept a ride to the train station from her insistent, volatile ex-spouse. And he sends the car careening into the Elbe River – a continuing symbolic demarcation that once signified a border between the formerly divided GDR and West Germany. 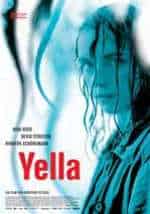 Yella miraculously survives the accident, swims to shore and proceeds to the train with her soggy baggage. But further troubles await Yella, as she becomes entangled in apparently routine corrupt business dealings in the West. She also encounters a handsome and charming venture capitalist hustler Philipp (Devid Striesow), who schools her in the devious methods of ripping off your economic targets, while they in turn are shrewdly encircling you for exploitation and sophisticated thievery.

While US audiences may scratch their heads as to just what is going on in this narrative brain teaser with all sorts of political undertones, German viewers are likely to approach this muted yet emphatic mood piece with far more clarity and dismay. A German political allegory equating a blunt and feverish appetite for sex and capitalism.