In quite a different adventure for Morgan Spurlock, perhaps only slightly more dangerous than the slow-motion assisted suicide of his McDonald’s gorge-fest documentary Super Size Me, the filmmaker embarks on a hide and seek journey to track down the world’s most notorious fugitive, in the rhetorically titled mock inquiry, Where In The World Is Osama Bin Laden. Oddly enough, the eccentric notorious director in his own right, seems to be engaging in drawing some weird paternal parallels here, whether subconscious or not, between Osama as the founding father of Al Qaeda and Spurlock’s own possibly wayward, anxiety-ridden situation as an imminently expectant, first time dad-to-be.

Inexplicably and seemingly impulsively bolting from home to find Bin Laden and abandoning his very pregnant wife for the time being, Spurlock appears to be working out some unresolved baby daddy issues, while rationalizing that he’s fleeing approaching fatherhood in order to do his part to make the world safer for newborns. Spurlock adds that he feels fully equipped to do so, though he’s only packing a camera, because Hollywood has served as his sorta boot camp, with on-screen instructions as to how a single man can save the world over and over again. Unfortunately, his lack of much background information, perspective or political context – unless you want to count his Terrorism 101 prep talk – are all too apparent. Though a visit to a tanning salon to blend in with the Arab locals, presents itself as a pretty wise suggestion. 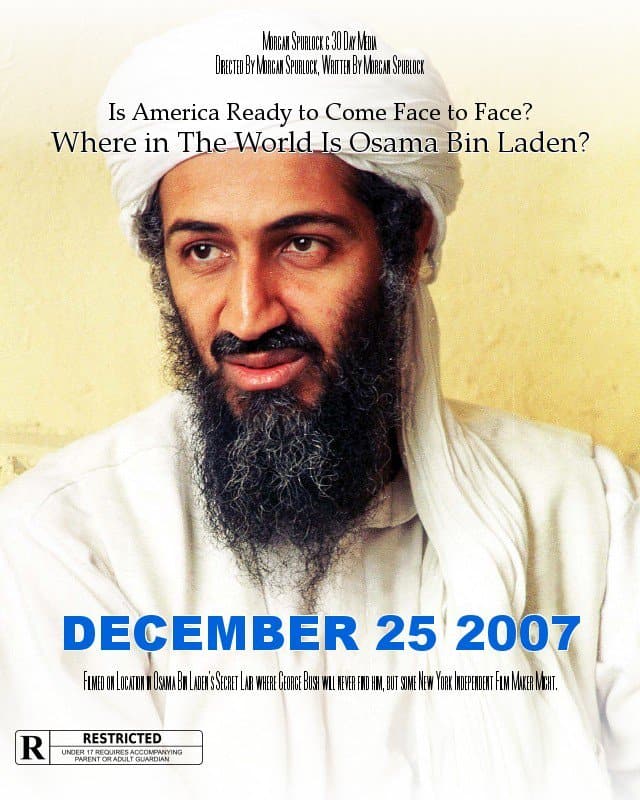 Spurlock wanders all around the Middle East and mostly doing the Ugly American thing and interviewing whoever will talk to him – which apparently are primarily a skewered or pre-rehearsed friendly few. He proposes with reasonable suspicion that the world’s superpower has failed to find a single man, so he’s up to the task. And the accumulation here of man-in-the-street, home movies style responses about Bin Laden’s whereabouts or intentions are fairly underwhelming, with the greatest excitement generated when a crowd of Hassidim gather in an Israeli street to curse out the grinning filmmaker. And with one elderly gent nearly taking a swing at him. Hey, not even a single visit to a McD’s in the Third World, what gives, Spurlock?

The filmmaker’s simplistic conclusions before he rushes back just in time to dive into the underwater birthing tub back home, are basically that everybody in the world is just as nice as we are, so why can’t we all just all get along. An indication that Spurlock may have freed his body from junk food, but his mind may still have a long way to go. In addition to which, if you’re asking if this is an anti-war or pro-war movie, it’s really hard to tell. A kind of Al Qaeda For Dummies. And much like Spurlock’s Super-Size Me quest into fast food hell, it’s heavy on the sugar and with little substance to chew on.