With the scope of its runaway anti-war passion overriding its sense of purpose, the social satire War,Inc. fashions blunt humor as the chosen weapon of political persuasion, while sacrificing impact. Producer, co-writer and star John Cusack is clearly condemning profiteering military adventurism as big business with sincere determination, but the line between the chaos of war and the chaos of moviemaking is lost somewhere in the process.

Cusack is Hauser in War, Inc., a jaded mercenary for the US military corporation Tamerlane, holed up in war-torn Turaqistan in bullet-proof designer suits. Hauser is awaiting orders from a crafty former vice president (Dan Aykroyd) to assassinate a local oil minister by the name of Omar Sharif, who is running interference on US plans to build a lucrative oil pipeline there.

Turning up to blow the whistle on these dastardly deeds – including a US occupation military force hidden deep within the recesses of a fast food joint and with a password code that goes something like, ‘hold the pickles and heavy on the boss sauce’ – is nosy investigative reporter, Natalie Hegalhuzen (Marisa Tomei). Hauser spends a good deal of the remainder of this global pandemonium likewise dodging counter-assassins, along with the Middle Eastern singing superstar sexpot, Yonica Babyyeah (Hilary Duff), a jailbait temptress who is hot for older men and also into a kinky routine having to do with slipping scorpions down into her underwear. 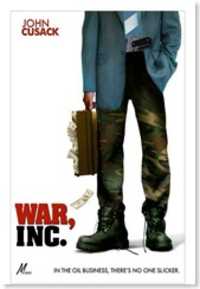 Joan Cusack and Ben Kingsley get tossed into the mix as well, as a cranky Tamerlane Girl Friday and a sinister CIA agent with a timely knack for undercover diving into garbage, respectively. And during a showdown finale at a wedding reception, the ladies in Hauser’s life – Hegalhuzen and Babyyeah – are not too shy to rip off their taffeta and kick invading male butt, machine gun style.

A case of too many plots and punchlines spoiling the brew, War Inc.’s style of raucous, often flippant humor to talk about the tragic state of the world right now, may be an acquired taste for most. But the film has its combo Dr. Strangelove/Mash heart in the right place, with its futuristic brand of imperialism run amok, and a war amputee lady chorus line of dancing prosthetic legs thrown in. Cusack deserves at least a couple of kudos, for sheer extreme enthusiasm.