A doomsday eco-toon that is equal parts cautionary tale and hopeful humor, WALL-E could likewise be deemed An Inconvenient Truth for kids. A Pixar adventure that manages to carry the weight of its story without much benefit of dialogue beyond computer blip-speak, WALL-E makes the grim environmental prognosis of today go down a little easier with its flights of cyber-fancy, for the young audiences who will be burdened with determining that future at risk, all too rapidly closing in on them.

WALL-E is Waste Allocation Load Lifter Earth-Class, apparently the last robotic trash compactor around after humans have abandoned earth and fled into outer space. This, after so much garbage has piled up on the planet that it’s become uninhabitable. Not to worry, the giddy droid toils away at his job, building skyscrapers out of the muck that have come to resemble a surreal, dingy metropolis. With only a loyal cockroach for a sidekick, WALL-E wards off his loneliness by dabbling in collectible junk, like bras and supermarket shopping carts, along the musical numbers on a found videotape of Hello Dolly, set on continual rewind. 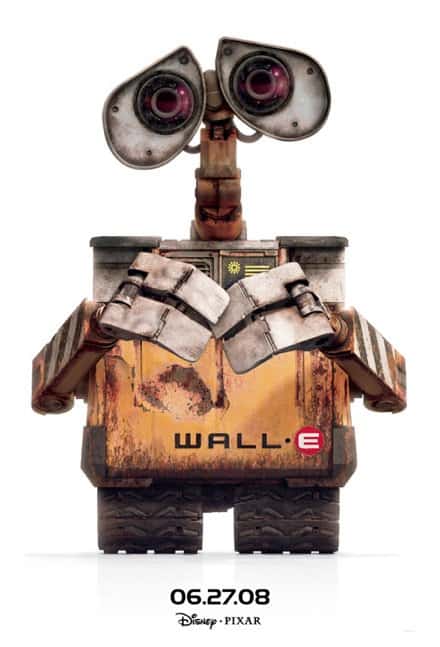 Unaware of just how lonely he may be, WALL-E comes to terms with his need for quality companionship with the arrival of EVE – Extra-terrestrial Vegetation Evaluator – a rather combative egg-shaped alien robot who stops over one day by spaceship. After zapping what she misconstrues as potential enemies on planet earth, a highly suspicious EVE is slowly befriended by the persistent WALL-E, a meeting of cyber-minds which builds into a budding romance.

WALL-E is soon draping an astonished and delighted EVE in Christmas lights, ferrying her around in a shopping cart and depositing a gift of love – a tiny plant – in her, well, compartment. And just as EVE is about to forget her secret mission on earth, she’s scooped up into her spaceship for the return flight. But not before a forlorn WALL-E secretly hitches a ride, where he’s taken to a human space station filled with the aforementioned earth refugees. And who have all grown quite chubby as slacker cosmos potatoes, so to speak, while biding their time in the lap of sedentary luxury, awaiting a return through the centuries to a hopefully ecologically healed planet.

With its masses of frequently disorganized assembled details substituting for dialogue, and the interminable racket of cyber-blips and related sounds, audiences may come to feel like they’re being held captive inside a computer for the duration, rather than a captive audience inside a movie theater. But WALL-E does sustain a momentum as a gently crafted, sweetened tough love tale, directed by Andrew Stanton (Toy Story, Finding Nemo), touching on senseless human waste, and rebellious robot computers with much more to teach humankind than just sending emails.