Although Woody Allen will forever remain most closely associated with his beloved hometown, the New York City native has proven to be a cinematic expatriate as of late, shooting his last four films over in Europe. Vicky Cristina Barcelona, his first set in Spain, proves to be his most impressive offering since Match Point. In fact, this delightful romantic comedy is easily on par with the best battle-of-the-sexes classics he made in the prime of his career, movies like Annie Hall (1977), Manhattan (1979) and Hannah and Her Sisters (1986).

Now well into his seventies, the legendary actor/writer/director has opted to stay behind the camera, turning to this year’s Oscar-winner, Javier Bardem (for No Country for Old Men), to fill his familiar role as the highly-neurotic leading man in the midst of a relationship crisis. And Allen doesn’t even provide his trademark voiceover here, instead tapping Christopher Evan Welch to serve as an omniscient narrator. 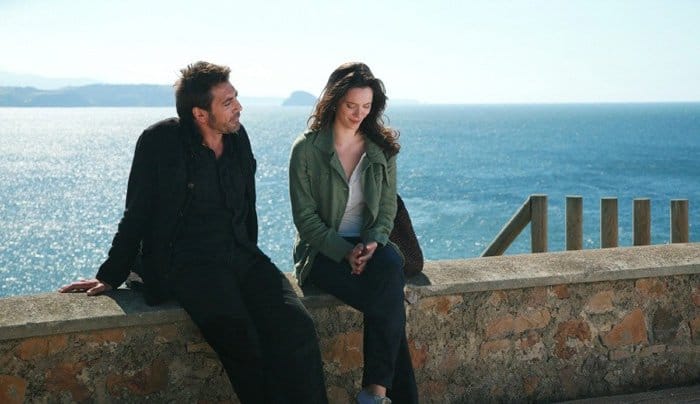 The film revolves around a messy love quadrangle, no pentangle, which unfolds against a variety of visually-bracing Barcelona backdrops. At the point of departure we’re introduced to Vicky (Rebecca Hall) and Cristina (Scarlett Johansson), a couple of American tourists in town for the summer. It is immediately established that these best friends are as different as night and day, especially when it comes to men.

Conventional Vicky is engaged to Doug (Chris Messina), a reliable provider she already finds a bit boring. Relatively-irresponsible Cristina, on the other hand, is an adventurous free-spirit more interested in finding passion than commitment.

So, it’s no surprise that they have diametrically-opposed initial reactions upon being approached by the proverbial tall, dark and handsome stranger who spotted them from across a crowded room. Juan Antonio (Bardem), a local artist and notorious womanizer, simultaneously invites them to join him aboard a private plane for a romantic, overnight escape to Oviedo, proposing that they both might like to share his bed at the end of the evening. 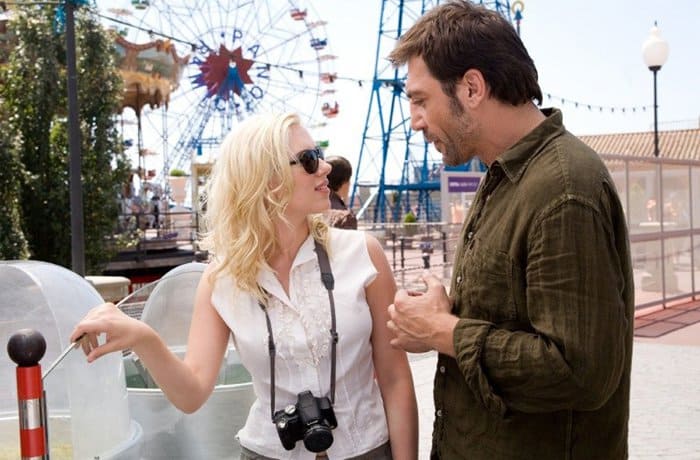 While Vicky reflexively recoils in disgust at the explicit overture, Cristina is flattered and finds herself attracted to all the drama seemingly surrounding the dangerous, Latin bad boy, especially because he’d once been stabbed by his unstable wife. Assured that hot-headed Maria Elena (Penelope Cruz) is now living contentedly with an architect in Madrid, the two accompany Juan Antonio to Oviedo, though with no intentions of being seduced by him.

Shockingly, Vicky lets down her defenses and sleeps with Juan Antonio the first night, though keeping their liaison a secret, since she’s about to be married. Cristina soon follows suit, and even shacks up with him back in Barcelona when their torrid affair takes off.

The plot thickens when crazy Maria Elena shows up unannounced, suicidal and desperately in need of a place to stay. Juan Antonio still has a weak spot for his ex, and lets her move in, too. It’s easy to imagine the sort of hilarious hijinks Woody Allen might script for a trio of frustrated females vying for the attentions and affections of a hapless hunk whose trying to please all three at once. And just when you think the situation couldn’t possibly get any more complicated, fifth wheel Doug decides to fly to Spain to see his fiancee.

Featuring sublime support performances by Patricia Clarkson and Kevin Dunn, Vicky Cristina Barcelona is vintage Woody Allen not to be missed. For it’s not merely a madcap misadventure, but also a thought-provoking cautionary tale juxtaposing blind adherence to American Puritanical values against some more open-minded alternative ways of relating.

In Catalan, English and Spanish with subtitles

To see a trailer of Vicky Cristina Barcelona,