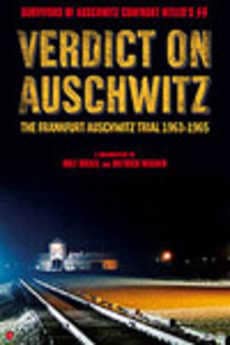 Nazi Trial Documentary Chronicles the Horrors of the Holocaust

Between 1963 and 1965, a score of ex-Nazis were put on trial in Frankfurt for participating in the systematic slaughter of six million Jews at Auschwitz. Before delivering its verdict, the German court heard chilling testimony from hundreds of witnesses, including 211 concentration camp internees and the 20 defendants. Fortunately, because the entire proceeding was preserved on audiotape, these detailed eyewitness accounts are still around today to refute the growing number of nuts who now question whether the Holocaust ever happened.

While a transcript of the entire 430 hours of tapes is available on DVD-ROM from the Fritz Bauer Institute, a much more manageable way of revisiting the landmark case might be by simply seeing Verdict on Auschwitz. For this grim documentary offers a rare glimpse not only into the minds of numerous, unrepentant Nazi monsters but into those of their anguished victims, as well.

Thus, we hear the accused repeatedly rationalize unspeakable atrocities as just following orders, while the survivors recount their suffering. For instance, we learn exactly how Jews unknowingly walked quietly to their deaths in the gas chambers.

They were tricked until the last moment into believing they were only going to bathe. To avoid suspicion, they were first herded into an area marked “Changing Room” and were each instructed to remember precisely on which spot they were leaving their clothes. But instead of water, all that came out of the nozzle in the ceiling of the shower was deadly Zyklon B. Then, with a callous, mechanized efficiency, the pile of corpses thus created were immediately swept into a crematorium.

The movie augments such stunning recollections with interviews and archival footage, shocking visual evidence confirming every claim. What is most amazing is the arrogance of the Nazis, who apparently had the audacity to film their ethnic cleansing. Despite its obvious value as a teaching resource, Verdict on Auschwitz is definitely not for young children, since it graphically depicts numerous actual executions. Otherwise, this damning documentary serves as a sobering, if painful reminder of one of the most shameful chapters in human history, and as irrefutable proof of Hitler’s final solution.

Unrated In German with subtitles.