Espionage missions are valued by the degree to which the operatives excel in confounding observers of their behavior and succeed in running major interference around exactly what they’re up to, and who they are. It’s not wise, on the other hand, for filmmakers to revel in producing the very same effect with their enigmatic characters. Perplexed audiences tend to not be happy campers, and may leave the theaters feeling a little like dinner guests served empty plates.

A case in point is the breathlessly paced psychological spy thriller, Traitor. Written and directed by Day After Tomorrow screenwriter Jeffrey Nachmanoff, Traitor is based on a story idea of one of the film’s producers, comedian Steve Martin – who knew. This grim, circular maze of a yarn takes audiences along on a tense journey, but pretty much leaves them off back at the starting gate. 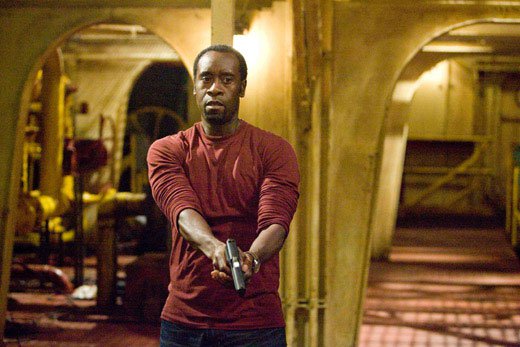 A globe trotting Don Cheadle baffles authorities and audiences alike in Traitor as former US Special Ops officer Samir Horn. Born to a Sudanese dad and American mother, Samir witnessed the horrific death of his father as a young boy, during a car bomb explosion in Sudan. But what he’s mulling in the here and now in reaction to that childhood trauma, is anybody’s guess.

And the fact that this shady gent keeps turning up – and frequently walking away – from the scenes of terrorist attacks, and with a CIA mystery figure (Jeff Daniels) never far behind, has FBI law enforcement sleuth Clayton (Guy Pearce) in perpetual high alert pursuit mode. As for Samir, his wide variety of premeditated and otherwise preoccupations includes a stint as a Middle Eastern fanatic arms peddler, Yemenese prison escape artist, Euro bomb suspect, and religiously when not ideologically conflicted devout Muslim.

In case you’re wondering by now if Samir is only pretending to be homicidal to make the world safe for US democracy or hegemony, take your pick – think again. This double or maybe even triple agent dude professing patriotic attitude on his home turf, decidedly favors a kind of ‘this hurts me more than it hurts you’ scorched earth policy in conjunction with an end justifies the means philosophy of life, a mentality not exactly conducive to cozy plot resolutions.