With fifteen years having passed since the onset of the Toy Story craze, and over a decade following the first sequel, Toy Story 3 is faced with the dual challenge of not only reprising its nostalgia appeal for a generation having long left that childhood fantasy phase behind, but to also seduce a current crop of jaded kid audiences today, who’ve already been bombarded with elaborate hi-tech digital screen magic since birth, and well before they’ll be hitting the theaters for this third installment.

So has Toy Story 3 been worth the wait? Let’s just say that sometimes long overdue anticipation is not a good thing. Especially when faced with all the animated competition that’s turned up along the way. And animated may well be the best choice of words in this instance, as too much action for its own good and perpetual peril appear to have preempted attention to story and character detail. And from where this critic sat, literally and otherwise, the adults in the audience seemed to be a whole lot more charmed and amused than their fidgety kid companions. 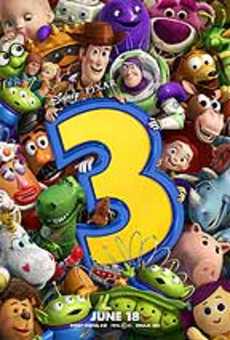 When the sequel begins, Andy (John Morris) is nearly grown up, which is never a good sign for playthings. While packing up to head off to college, Andy is faced with the dilemma of whether to cart his chest full of toys over to the local day care center, let a couple of favorites tag along with him, stuff the lot in the attic, or just toss them in the trash. And cowpoke Woody (Tom Hanks), the eternal optimist boy toy with the most leadership qualities and organizational skills, springs into action. In any case, the spurned objects are all adamant that they want to be played with, not donated or yard-saled.

After numerous close calls, the toys end up at the day care center, where they’re kicked around and abused by insensitive toddlers, when not tyrannized by Lotso (Ned Beatty), a stuffed animal tyrant smelling suspiciously of strawberries. While the lion’s share of subsequent scenarios involve playtime peril and hide and seek giddy chase scenes, with plot points too numerous and convoluted for the attention span of tots in the audience.

Most giggle-inducing are occasional detours into random delightful silliness. Including a supremely vain and possibly duplicitous Ken doll in a chance encounter with an irresistible Barbie; mechanical space cadet Buzz Lightyear (Tim Allen) getting his wires accidentally crossed, and reprogrammed into a Spanish speaking chivalrous Latin lover; and a candy vending machine as a cover for an internal gambling den, where an incorrigible assortment of toys just happen to be playing around with your deposited money.

Beyond the revisited antics for the memory lane buffs in the theater, not sure what impression is intended for the small fry in attendance, or if the Lee Unkrich (Finding Nemo) directed and Michael Arndt (Little Miss Sunshine) scripted screen spectacle is merely toying with their affections. But if it’s got anything to do with laying a guilt trip on little ones to love possessions more than anything else and crave consumption, I’m not buying it.