A movie about an over the hill Chilean street thug obsessed with John Travolta’s Tony Manero character in Saturday Night Fever, this gritty psychological downer bearing the same name plays out during the ruthlessly repressive Pinochet military coup period in the late 1970s, following General Pinochet’s execution of then President Allende. But with fiftysomething coarse featured, alternately brooding and diabolical slacker Raul (Alfredo Castro) looking and acting more like Al Pacino in Brian De Palma’s Scarface than the young Travolta back then, Tony Manero would have been more aptly titled Tony Montana, as a reflection of that anger management fiend on screen.

In the film, Raul is an indigent US pop culture fanatic, biding his time in a seedy slum while mulling a scheme to connive his way on to an American Idol local TV show, Chilean style, for a John Travolta/Saturday Night Fever impersonation competition. Where far younger, though no less bottom feeder aspiring disco dancers have signed up to pursue the identical dream as well.

In a society back then where a mix of random street crimes, and violent attacks against civilians by Pinochet operatives have become routine, Raul is increasingly drawn into the prevailing predatory culture all around him. And, as a means of financing his grasp at peculiar fame, that is when not preoccupied repressing his inner rage over chronic sexual impotency, or in a grasp at self-esteem by seducing his girfriend’s young daughter. Oddly, Raul is also at times a more symbiotic crass criminal, following on the heels of the primary predatory assailants to grab whatever is left of the possessions of their victims, dead or alive. 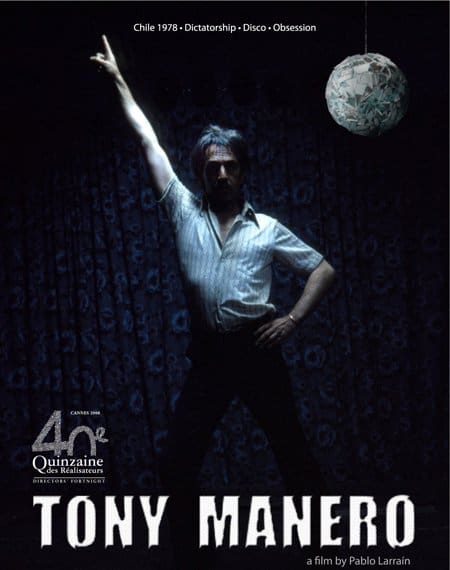 And Raul impulsively and brutally dispatches on a whim, anyone he perceives as a momentary impediment to his twisted, perpetual yearning for unrealistic celebrityhood. The Pinochet henchmen, in contrast, usually operate off camera. And save for occasional glimpses of their dastardly deeds, seem to be let off the hook in this movie, relatively speaking, in comparison to the shockingly graphic and horrific crimes committed by Raul. A movie in which any sympathetic characters are hard to come by, to say the least.

This distortion of the historical record here, in which middle class elite elements, not the masses of people, both elevated Pinochet to power and mirrored him, in order to destroy a persecuted popular social movement gravitating around Allende, is both irresponsible and reprehensible. And a display of deplorable disregard on the part of filmmaker Pablo Larrain as mere irreverent creative fancy, for the many who suffered and perished as Pinochet’s crimes against humanity were inflicted upon them.