Updating the 1941 Lon Chaney Jr. split personality shape shifter spree The Wolf Man on which it is based, Benicio Del Toro’s confused canine in Joe Johnston’s The Wolfman exhibits similarly alarming anti-social tendencies when in mixed company, but with somewhat less to chew on. And while German emigre screenwriter Curt Siodmak’s classic original bore the imprint of someone who had fled the similarly lethal anti-semitic scourge of Hitler, with Bela Lugosi providing the narrative bite, the new and not improved Wolf Man veers more towards dysfunctional family conflict and outsider phobia species profiling.

Del Toro is Lawrence Talbot, at least for now, a brooding late 19th century rural British loner who was sent by his callous dad (Anthony Hopkins) to a London insane asylum and then to live with an aunt in the US, after witnessing as a young boy the violent death of his mother, an alleged suicide. But Talbot, long estranged from his father, has been summoned back to the remote family estate by his brother’s distraught fiance Gwen Conliffe (Emily Blunt), after he’s found brutally murdered, possibly by the local ostracized gypsies or perhaps a wolf. Even a circus bear owned by the gypsies falls under suspicion, though his only claim to fame is dancing. 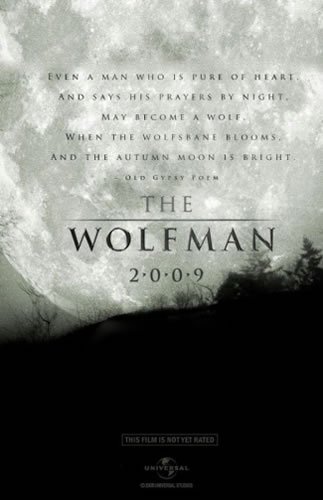 And while the frantic villagers hunt for the four legged culprit, Lawrence is bitten by the apparently bulletproof beast but survives. Which according to the gypsies is an irreversible fate worse than death, because only his annihilation will put all the humans in the vicinity out of harm’s way. At the same time, Lawrence is stunned by his sudden physical prowess without benefit of steroids, and a potentially uncontrollable basic instinct to involuntarily mate with the beyond clueless Victorian male magnet Gwen.

Soon a sly snoop from Scotland Yard is on the case, while the hamlet’s minister deduces the havoc as God’s vengeance for man’s bad behavior in general, and the inhabitants accuse the gypsies of perpetrating a curse. And when Lawrence is finally cornered as the homicidal hybrid culprit, he’s sent back to the insane asylum, where he soon takes it over, after objecting to what seems like an application of primitive waterboarding as a cure for what the pompous practitioners there misdiagnose as mental illness. Meanwhile, possible allusions to current fears of foreign orchestrated terrorism, as well as the appearance of Darwin’s Origin Of Species shocker linking man to beast several decades prior to the timeline of this yarn, loom a bit in the background.

And without giving too much away, all does not particularly end well for the bite much worse than his bark creature. And the same can unfortunately be said for this movie, which features a like father like son climactic showdown staged more as a World Wrestling Federation bout with fur.

The Wolf Man: The Manimal Who Came To Dinner.