While horror movies typically insert drama as a secondary sidebar device just to move the main menu graphic gore along, The Uninvited has something more involving in mind. In this supernatural gothic mix playing out in a contrasting serene upscale seaside mecca, it’s extreme family dysfunction and teen angst that energize the scare tactics. And the fact that characters get explored and fleshed out before individually dispatching them to their explicitly nasty fates, adds an essential element of getting to know them enough, so that we care while they squirm.

A joint creative conspiracy sibling debut crafted by The Guard Brothers, Charles And Thomas, The Uninvited presents a dual notion in its title, of occult home invaders along with Dad’s (David Strathairn) new unwelcome hottie girlfriend Rachel (Elizabeth Banks), who has moved in and taken over following the death of their sickly invalid mom in a fire. Not just the usual child resentment towards step-parents, the irate sulking teen daughters Alex (Arielle Kebbel) and younger sister Anna (Emily Browning) are especially fuming because they caught Rachel, who was the nurse caring for their mother at the time, having an affair with their father while Mom was still alive. 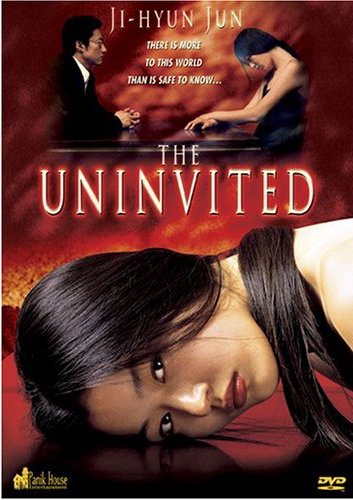 And it’s not long before a traumatized Anna, who was recently incarcerated in the local mental hospital following the fire, is seeing apparitions of her dead mother emerging from garbage bags and even lurking under the kitchen drain pipes. And with the creepy maternal ghost hinting strongly that the fire was no accident, but Rachel instead who plotted her demise, and to go do something about it sooner than later. Especially before Anna and her sister become the scheming conniver’s next victims.

It goes without saying in this sort of horror fare, that no matter how brainy the prospective victims may be, they always make a really dumb decision. Like deciding to wait until morning to call the cops, when this suspicious aspiring stepmom is waving all sorts of incriminating deadly weapons the night before. But how else to clear the way for more than a few unanticipated scary surprises, that wrap up this nail biter rather nicely.