An Ugly Sitcom, and That’s the Truth

Abby Richter (Katherine Heigl) is the exasperated producer of Sacramento AM, a TV morning show suffering from poor ratings. Presently, morale in the studio is so low that crew members have begun bickering with each other on a daily basis, even co-hosts Georgia (Cheryl Hines) and Larry Redding (John Michael Higgins) who happen to be married to each other.

Faced with the prospect of having her program cancelled, Abby grudgingly agrees to let her boss (Nick Searcy) make several programming changes, although she hates the idea of allowing corporate management to dictate content. Still, she could never have guessed that the first personality he’d hire would be a sexist like Mike Chadway (Gerard Butler), a Neanderthal with a popular relationship advice show on public access television.

It turns out that just the night before, Abby happened to tune in to an episode of “The Ugly Truth” by accident. And she’d been so outraged by Mike’s misogynistic musings that she was prompted to call in to confront him on the air about his pronouncement that all men are shallow and only interested in a woman’s looks. Unfortunately, he gets the better of the exchange, putting the anonymous caller on the defensive by insinuating that she was a lonely spinster. Then, he referred to her as a “house-bound inbred” before hanging up on her unceremoniously.

Romantically-challenged Abby’s love life has admittedly been a disappointment, between focusing on her career and saving herself for the sort of perfect gentleman that macho Mike claims doesn’t exist. Of course, the two butt heads from the moment he arrives at the station the following morning, especially when he goes over her head to get approval for segments featuring everything from female Jello wrestling to a couple of brainless bimbos billed as “The Fun Bag Twins.” 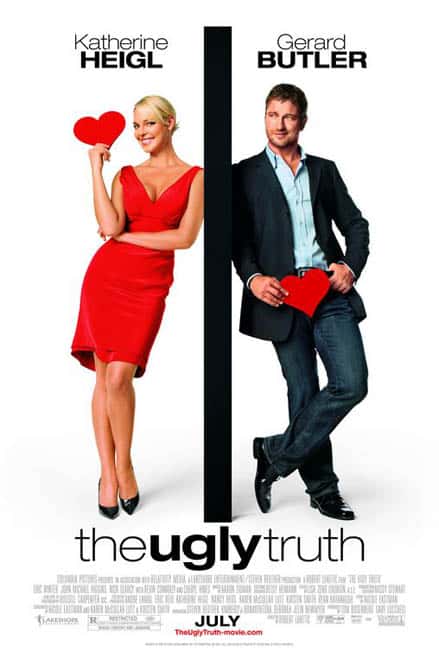 So unfolds the battle-of-the-sexes scenario established at the outset of The Ugly Truth, a predictable romantic comedy directed by Robert Luketic (Monster in Law). Only in a formulaic Hollywood fairytale could an infuriated feminist like Abby eventually fall for a creepy cave man like Mike. This transpires in spite of the appearance of a perfectly-respectable suitor, Colin (Eric Winter), a handsome and polite doctor with all the attributes she’d been holding out for. The script (written by a trio of ostensibly self-hating females, by the way) has her preferring a date-rape advocate who believes that “Just because she says no doesn’t mean she means no.”

But worse than the implausible and patently offensive plotline is the picture’s relentlessly-raunchy brand of humor designed to appeal to the lowest common denominator in a decidedly-coarse fashion. For example, director Luketic shamelessly lifts the classic fake orgasm scene from When Harry Met Sally, except that the climax is neither faux nor funny in this crude variation on the theme.

Ugly, and that’s the truth!