A battle of the sexes quirky quartet of stories playing out in the same hotel but which thankfully avoids that emerging cliche of coincidentally interactive strangers, The Trouble With Romance delves into the alternately nutty and tragic ways hyperactive libidos tend to mess with the heads of young adults. Or, as one hottie wise beyond her years and who happens to be a resident call girl opines, it’s amazing ‘how the heart wants to love, even when we don’t want it to.’

Directed by young Asian American filmmaker Gene Rhee, The Trouble With Romance is scripted by no less than three writers, including Rhee, Mike Su, and one woman, Sharri Hefner. And you can almost overhear their heated script by committee sessions, with actual opposite sex arguments oddly mirroring how these conflicts would end up progressing among the many erotically stressed out characters. 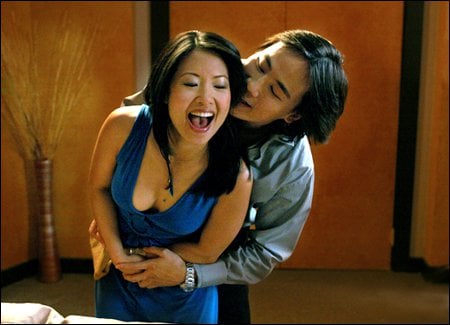 The vignettes include almost but not quite stranger sex between a nervous couple, ending with the woman locking herself in the john to consult with the imaginary bearded apparition of her ex-boyfriend; a long married pair who check into the hotel to spice up their lethargic sex lives, with a few hostile surprises turning up on the premeditated libidinous menu; a male party animal having trouble deciding between his attachment to his homeboys versus the woman he’s brought there to propose marriage to; and a lonely guy with a high priced hooker in tow, and both more into griping about complications when it comes to true love, than just going at it with ravenously unleashed carnal desires.

There are some tender and emotionally resonant moments in the film, but a great deal of the behavior, including glimpses of grossout beyond the beyond, reveal Rhee’s choices to be nearly as immature as some of his less palatable characters. At his weakest when seeming far too eager to please as a novice himself at the more often than not too frantically conceived game of lust, at least on screen, Rhee would have done well to heed the sage advice of the wise elder that one sulking character encounters in a stuck hotel elevator: Love is all about the journey, not the destination.