While seniors tend to get no respect in movies, more often than not seen through a narrow prism ranging from pitiful creatures to silly caricatures, The Stone Angel should be applauded for having something much more multi-dimensional in mind. Namely, that the elders of the tribe have accumulated a rich history behind them, and vivacious youthful dreams to match.

Based on the cross-generational Canadian novel by Margaret Laurence and directed by Kari Skogland, The Stone Angel feverishly pursues the intricacies of lives playing out across the many years. But this ambitious effort often sacrifices dramatic depth and clarity for details and chronological milestones.

Ellen Burstyn never disappoints as Hagar, a stubborn as a mule, borderline holy terror 90 year old rural Manitoba woman, who resists the efforts of her son Marvin (Dylan Baker) to put her in a nursing home. We soon get a revealing glimpse into the origins of Hagar’s feisty personality, through private flashbacks to her youth as a contrary, pigtailed free spirit, who rebelled against the domineering behavior of her stern, widowed Scottish immigrant father. 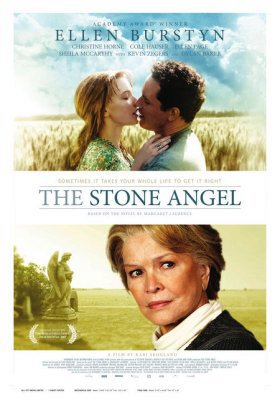 The obstinate, educated and independent-minded young woman (played by Christine Horne) later rejects the various suitors her father lines up for her to consider as marriage prospects. Including, she notes sarcastically, ‘the widowed doctor with three chins, the clothing salesman with more hair in his nose than on his head, and the undertaker who looks like a ferret.’ When Hagar defies her prosperous dad by marrying Bram (Cole Hauser), the local penniless bad boy hunk, he disowns her. And as the couple struggles through the years through unrelieved economic hardship, the marriage sours and Bram drifts into alcoholism and reckless, anti-social behavior.

All these many events flow through Hagar’s mind in the present, as she runs away back to the farm where she once raised her children and struggled to find happiness amid frequent personal tragedy. The problem is that far less would have been much more, as key episodes in this conflicted woman’s life are barely touched upon in passing without sufficient explanation, and are at times simply announced rather than dramatized.

There are devilishly delightful moments of surprising humor that break through the dreary chronology of family history, as when the elderly Hagar makes her continued interest in sexual urges more than clear to everyone around her. Or taking time out to share a joint with a stranger, and reminisce about her son’s pot garden on the farm that he thought she knew nothing about. And that unpredictable, precocious live wire Ellen Page turns up too for good measure in a steamy incestuous cameo, getting it on with a danger junkie kinda guy on Hagar’s memory lane kitchen table.