While horror movies have become tedious fare, relying on outworn conventional templates and recycled gotcha scare tactics, The Skeptic aims to keep viewers on their toes, as well as at the edge of their seats. A turbulent brainteaser blend of the supernatural and psychotic, with mystery novel elements tossed in too, the film playfully refuses to satisfy audience cravings these days for fast food narrative closure, and instead relies on the more traditional classic suspense that masterfully intrigues and eludes.

Tim Daly is Bryan Becket in The Skeptic, a sarcastic, emotionally atrophied upscale lawyer whose marriage is falling apart due to his intimacy issues. When Becket receives a call that his estranged elderly aunt has passed away, he seizes the opportunity to go live in the sprawling Victorian mansion for a time while arranging for the future of the estate, in order to distance himself from his unraveling marriage.

But what is as yet unknown to this supremely confident, studiously concrete thinker, is that the house may harbor long buried traumatic memories that he experienced there as a boy, when his mother died under mysterious circumstances. Also compounding these multiplying horrors, though not without some unresolved narrative threads, is an elegant but seemingly sinister abode that appears to be haunted one moment, and a frightening series of hallucinations experienced by Becket the next. 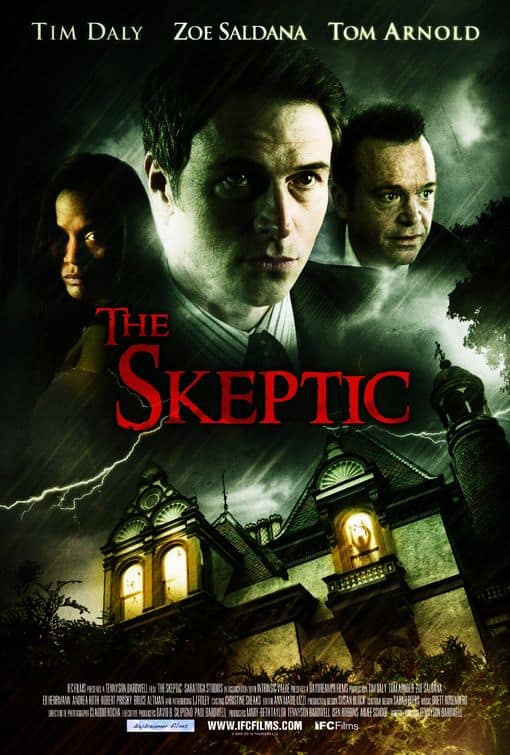 Written and directed by Tennyson Bardwell, The Skeptic is a very different kind of housing nightmare in this age of mass foreclosures, but one that likely embodies some of those reality based, subconscious seized shelter possession, or rather possessed, fears and phobias. In any case, the film stylishly teases and provokes with its power of suggestion, hide and seek tendencies, not just of apparitions that may not be apparitions at all, but a constantly shifting dynamic between the logical, psychic and psychological.

Turning up the tensions surrounding this spooky talking mansion, is Zoe Saldana as an unhinged telepathic ghostbuster making unwelcome house calls, and just as spaced out here, so to speak, as in her simultaneous big screen turn in Star Trek. Along with thespian vet Ed Hermann as a less than forthcoming evasive shrink, and Tom Arnold as the never disappointing, comical when not creepy legal colleague, with a few freaky possession issues of his own.