Possibly the first movie ever to send out an emergency warning to viewers to give up watching television like right now, The Signal serves up a bloody banquet of excessive, tasteless gore in typical slice and dice fashion, but with an odd infusion of unsavory humor that never meshes with the horror. Think fatal car crash with a laugh track.

Filmmakers David Bruckner, Jacob Gentry and Dan Bush team up to direct The Signal as fancifully configured arty slasher fare. The relentlessly sadistic proceedings are divided into distinctively labeled chapters for no particular discernible reason, except to perhaps allow the audience intermittent cooling down time amidst the endless carnage. 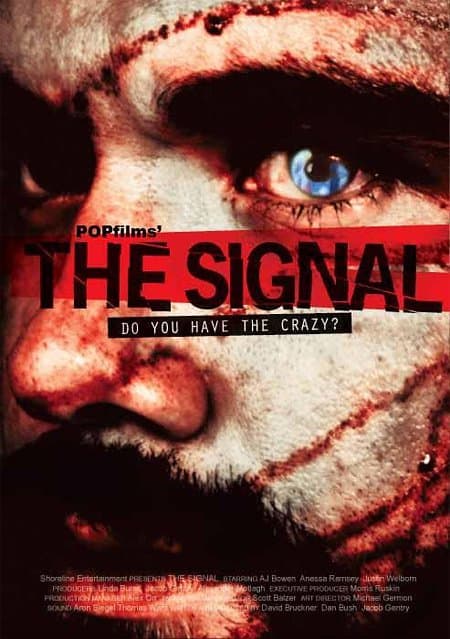 Employing a cast of characters with notably narrow acting range, the bare bones production competes for attention with ongoing butchery in a city called Terminus. A number of interconnected, abrasively colliding vignettes involve Maya (Anessa Ramsey), a young married woman in a secret affair with a frustrated, infatuated lover (Justin Welborn), her brutal, clueless husband Lewis (A.J. Bowen) who’s an exterminator in more ways than one, and a neighboring couple whose preparations for New Years festivities are more than rudely interrupted when the entire town suddenly goes insane from watching television.

The not so far-fetched premise here, is that TV can seriously rot your mind and even drive you off the deep end. But it’s also in a sense quite a shrewd notion cooked up by no less than three directors, that simultaneously saves a heap of dough on special effects to create scary creatures, when the monster is simply you.

But there is a single challenging idea at work here and in this particular relevant period of out-of-control terrorism mania, in a kind of satirical subversion that might be dubbed monster profiling. And that is, it’s eventually impossible for the truly TV psycho-zapped to be distinguished from the normal people in the process of losing their minds as well due to all the ongoing trauma – by us or each other. But who needs television to make everybody nuts, when the maniacs are in the movies. Pull the plug and pass the strait-jacket.