While identifying with characters in a bad situation is a movie audience must, drowning in their deep funk as much as they do, is a narrative no-no. And though the Cormac McCarthy bestseller on which the doomsday downer The Road is based, held readers in its sway with the lyrically conceived interior musings of its post-apocalyptic nomadic survivors, transporting that literary concept to the screen is even beyond the bleakness of the story’s centerpiece planet in utter ruin.

Framed as a series of unhappy recollections before the end of the world left few people in existence to roam the planet in search of food, humans on the menu and otherwise, The Road is oddly crammed with a sense of overwhelming weight and a hollow core at the same time. This dreary travelogue trudges along ruined landscapes with a distraught but determined father simply called Man (Viggo Mortensen) and his son, Boy (Kodi Smit-McPhee). Man’s wife known as Woman (Charlize Theron) has presumably died some years ago, as we learn in progressively grating flashbacks.

Unable to summon the will to live without much hope, and fearing a future as a victim of rape if not cannibalism by wandering tribes of men turned into predatory savages, Woman wandered off into the wilderness one day despite her husband’s pleas, to seal her fate rather than prolong it. After which father and son take off in search of some vestige of civilization that may still exist somewhere. 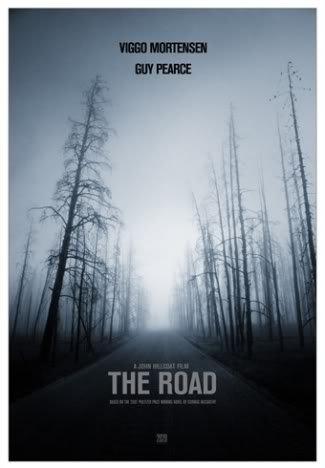 Though there are moments of unanticipated crushing emotional intensity and terrible heartbreak, those striking dramatic detours around the bend are few. And at all points in between, The Road is an utterly exhausting affair, likely leaving the audience nearly as perpetually pooped as the family in flight.

Mortensen, a far too little seen or heard Theron and an exemplary supporting cast of assorted ragged human prey and predators alike, admirably hold the sagging threads of dramatic tension together as they continually threaten to sink under the weight of a relentlessly depressing and overwhelming shrouded despair. And the muddy visuals, along with the miscasting of Boy with a child actor who excels at chronic whining but not much else, doesn’t help matters.

Nor should a film adapted from a novel, have to require a knowledge of the original work in order to be a satisfying experience, as fans of the book will likely insist. In other words, if you’ve been mulling embarking on this journey, good idea to cancel your reservations.