Sometimes obsession can be a positive thing. And that’s definitely the impression that comes across, when talking to actor John Cusack about his passionate labor of love in bringing the fictionalized final days of iconic classic writer Edgar Allen Poe to the screen, and immersing himself dramatically in the writer’s character, in James McTeigue’s The Raven. Cusack turned up at the immensely atmospheric literally underground historic writers gathering place, The Vault on Bleecker Street in NYC, to rendezvous for this conversation about the movie.

What is your fascination with Poe, and what were the challenges of capturing him in a movie?

JOHN CUSACK: People have wanted to do a story about Poe for a long time, but biopics are tough. You can only do so many things with time, and have to flash forward or backward. His creative life was so vast, that we thought we could put Poe as a character in his own stories.

The conceit of the story was smart, and it allowed us to explore more of his works in a piece of fiction. This is Poe’s version of going mad and other themes he had. But it is also true to the source because he was a great master writer, a master of the English language, and a master poet.

Poe also invented the detective genre. He was the godfather of goth, he wrote satire, and he also did burlesque. And the movie got to show all of his sides.

What about connecting to that time period?

JC: There were no telephones back then, so everyone communicated with letters. And the great thing about the research, was that there are so many of his letters. Which were incredibly revealing.

That’s where you can see that there were very human parts of him. And also a side that was at war with the world. He had all of these feelings of despair and loneliness, and a lot of passion.

And I read many of the biographies, and really liked Peter Ackroyd’s short biography Poe: A Life Cut Short. Then I immersed myself in Poe’s books, reading all of his stories to really get into him.

And what I respond to most in his works, is when he is writing about that twilight space between waking and dreaming, and life and death. He’s always exploring that twilight space, where he’s attracted to these almost godlike female figures in his life.

And there is this eternal love, mixed with death being in the room. I like that part of him. And it’s everywhere in his works and personal writings.

What surprised you most about Poe?

JC: I wasn’t aware that he was conscious of his fame, but he was actually very famous when he was alive. I also didn’t know that he went to West Point, and held a swimming record.

You know, he really did feel like the world was his stage and he must conquer it. He said once that he wouldn’t put up with anyone he could put down. And it has been said that he didn’t say one good word about any other English writer, living or dead.

And Poe really liked women, and liked being adored by women. I think he felt competitive and threatened by men, because he didn’t really have many male friends.

Many of the women in his life had died. His mother died in his arms of tuberculosis. And he sort of found a stepmother in a woman that was a friend of his. She died of tuberculosis too.

And he married his cousin, who also died of tuberculosis. So it was really like he was taking his sorrow, and turning it into all of these stories and creativity.

When you play someone who is like an icon like this, it can get two dimensional after awhile. You think of him as the sad Halloween guy, but when you research the life, you see that he’s writing satire and burlesque, and science fiction.

And he had such a wild and crazy imagination. He was out there.

Poe, from what I read, had manic energy and depression. He looked inward a lot, and had a brittle frenetic side to him.

And he was challenging people to duels all of the time. He was getting into fistfights as a kid, and later in the bars with sailors. And he was a gambler, because of his addictive nature.

You know, he’d spend his father’s money gambling ,and would lose it all. Then he’d tell his dad, you never loved me. And ask for money.

So he had a rogue quality to him, but he wasn’t a straight outlaw. He was refined, and saw himself as an aristocrat. He was a complicated character.

Do you think your movie will inspire new interest in Poe’s writings?

JC: I hope so. If it makes people want to read his stories again, that would be pretty cool. And if they read his stories, they will be able to see what we were trying to do.

To see the trailer The Raven: 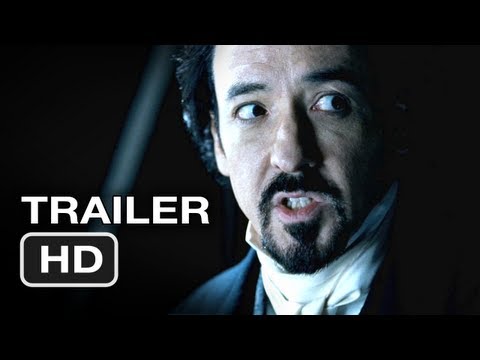