With a winking nod to the Peter Sellers mythic original, as well as his own 2006 neo-vintage heavily accented buffoonery for The Pink Panther 2, Steve Martin’s Inspector Jacques Clouseau is up against, not just a shrewd network of unstoppable global precious gem thieves, but the far less dainty current comedic reign of the grossouts on the big screen. And with its inventive wit perhaps better suited to more sophisticated post-adolescent palates, Martin’s brand of Chaplinesque physical humor, however uniquely clumsy, may come off as just a tad too polite for the youth audience.

When an assortment of famed artifacts like the Magna Carta and the Shroud of Tourin are swiped from their respective burglar proof glass displays, Chief Inspector Dreyfus (John Cleese) reluctantly calls in the way too eager, supremely bungling French investigator Clouseau to join the crew on the case. Which includes a mixed nuts ‘Dream Team’ of engaging international nitwits played by Jean Reno, Andy Garcia and Alfred Molina, in pursuit of a mystery villain prone to leaving behind his triumphant calling card, The Tornado, at every scene of the crime. And elegantly deflecting mounting suspicions, is a crafty playboy sports nut (Jeremy Irons) with possible upscale menace on his mind. 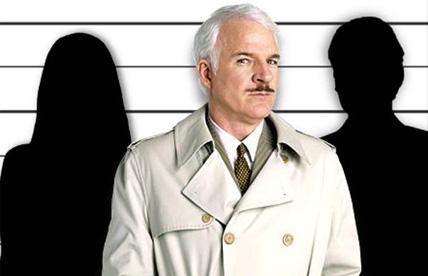 But the giddily politically incorrect Clouseau is first ordered to enroll in a remedial crash course in minimally acceptable etiquette towards women and foreigners. And with Lily Tomlin as his increasingly exasperated personal trainer in the art of losing bad manners, these interludes steal the show as the funniest in this otherwise primarily conventional cat and mouse crime caper.

Martin’s all purpose good cop/bad cop excels mostly at flaunting his down time dark side, when engaged in beating up children, burning down ritzy restaurants more than once, and ogling every woman in the vicinity. But Norwegian director Harald Zwart’s reconceived silly beyond belief homage to Pink Panther creator Blake Edwards and his mischievous iconic master sleuth Peter Sellers, while navigating its way through a maze of woefully mismatched individually assigned accents, has a much too old fashioned flavor lost somewhere in translation, and in time.