Christmas Tale Arrives on DVD in Time for Easter 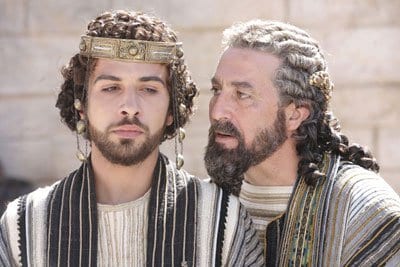 If you’re in the market for a Christmas movie that’s more about the birth of Jesus than the arrival of Santa, then The Nativity Story might be the one for you. This visually-vivid, if emotionally-flat version of the prophetic Biblical tale chronicles the unconsummated marriage of Mary (Keisha Castle-Hughes) and Joseph (Oscar Isaac) and the host of woes visited upon the couple on the way to the miraculous virgin birth of Jesus in a stable.

Those familiar with the scriptures well remember that Kodak moment in the creche with Madonna cradling her bouncing bundle of joy wrapped in swaddling clothes while surrounded by three wise men, an ox, and an ass. But, before this picture is allowed to arrive there, the Archangel Gabriel (Alexander Siddig) must first appear to inform Mary that she has been handpicked by God to bear his son.

Although the chaste teen handles her mind-blowing pregnancy well, she soon finds herself the subject of scorn in her community as a scandalous, unwed, expecting mother. Fortunately, the angel also informs Joe that his job is to make Mary an honest woman, so the two tie the knot.

But instead of enjoying a fabulous honeymoon, the bulk of this religious road saga focuses on the faithful couple’s nightmare of a forced march from Nazareth to Bethlehem. Though these patient peasants are tested along the way, don’t expect much mystery, since any devout Christian ought to know exactly how this epic journey is fated to turn out.

Besides the Magi, who provide some very welcome comic relief, behaving more like three wise guys, than three wise men, the most amusing aspect of this flick is a piece of trivia, namely, that Keisha Castle-Hughes, like her character, Mary, is pregnant and single. However, the teenager has made no claims of divine intervention or visits from disembodied spirits.