Though Jack The Ripper left horrifically mutilated female bodies scattered across London’s teeming slums way over a century ago, the enduring fascination and folkloric status of his dastardly deeds even today, says as much about the most famous serial killer in history as it does about a public still obsessing over him. Which makes it no surprise, that David Ondaatje’s The Lodger is at least the sixth film based on Marie Belloc Lowndes’s 1913 novel about the elusive legendary homicidal maniac, and very likely not the last to come.

The first to try his hand at bringing the novel to the screen was Alfred Hitchcock, as one of his earliest films in 1927. And nobody has topped the master of the media in that Ripper ripoff regard, even with the progressively elaborate hi-tech visual gimmicks at their disposal. Ondaatje’s slick more than gritty new version, a transplant to the flashy when not murky LA underbelly, commands attention more for suspense than detail or character dissection. 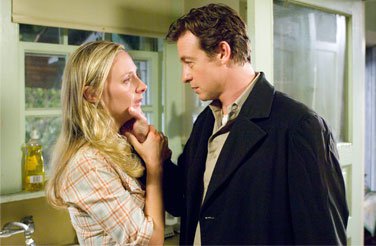 Alfred Molina is Detective Manning in The Lodger, an abrasive nervous wreck LAPD homicide investigator whose rabid zeal for collaring a Ripper copycat killer years ago, led to the execution of an innocent Latino man. And when the tortured, carved up bodies of prostitutes start littering the streets of LA again, Manning’s unorthodox obsession with tracking down the taunting killer leads to his department suspension, in addition to the attempted suicide of his now institutionalized wife that he’s driven over the edge emotionally. Which results in Manning himself being pegged as one of at least three potential suspects, as he eludes the LAPD in his new free lance fixation on cornering the perpetrator, as is more than typical in these sorts of cop thrillers.

Meanwhile, among the other suspects is Joe Bunting (Donal Logue), a security guard who keeps unusually long and unexplained hours away from home in the middle of the night, when not abusing his mentally fragile wife Ellen (Hope Davis), who is pushed to the brink of insanity and heavy duty medications. There’s also Malcolm (Simon Baker), a mysterious stranger who shows up one day to rent the guest house adjoining the strapped for cash couple’s sprawling, spooky home, and who may or may not be a figment of Ellen’s apparently overactive imagination.

The most intriguing element in this copycat thriller about copycat Ripper homicidal psychopaths, is not the mechanics of the mystery killer’s madness, which is glossed over and upstaged by the how of his logistical game plan, as opposed to the psychological question of why. It’s the contrast of unhealthy obsessions on both sides of the law, along with the presence of a number of women in this story, victimized to varying degrees by the men in their lives acting on buried or unacknowledged sadistic impulses towards females. And that may indicate a lot more on the mind of the director than such potentially uninhibited behavior taken to criminal extremes. If only these sinister, dramatically worthy innuendos had assumed a more investigative inquiry to rival the sleuthing after Ripper’s born again diabolical impersonator.