If a filmaker gets inspired to explore language because it has become an increasingly suspicious form of communication based on the exploitation of the spoken word for purposes of distortion and mass manipulation, that doesn’t sound like such a bad idea. But to distrust language to such an extent that it’s nearly totally discarded in favor of visual meaning alone, as Jim Jarmusch does with The Limits Of Control, can spell disaster for a movie. And make no mistake, this postmodern take on the classic noir policier, rather than conjuring air so thick you could cut it with a knife, instead provides atmosphere so thin that the lack of substance may simply send you into a drowy state of mind.

Not to say that high-minded notions about experimental narrative can’t lift a film into intriguing transcendant territory, but you do have to come down to earth some time. And sitting through the entire two hour stretch of The Limits Of Control is a little like waiting for the film to begin for the entire duration, as the story settles into pretty much permanent pause button mode. 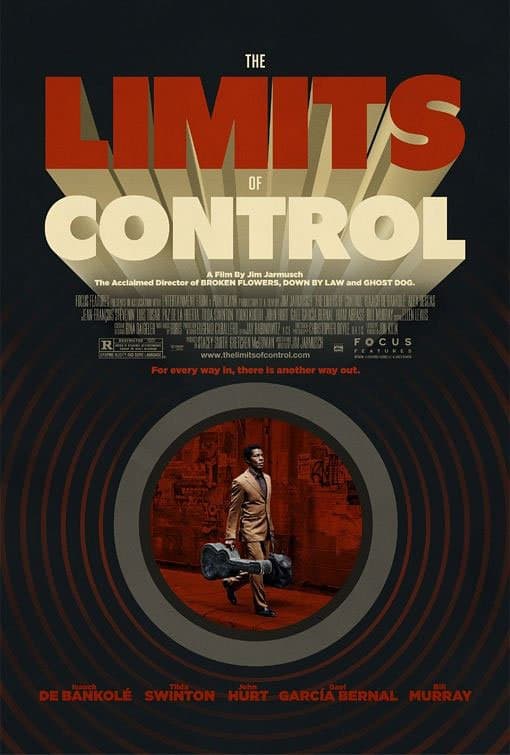 To clear matters up at least partically, Jamusch based his movie and its enigmatic title on an essay of the same name written by the late Beat novelist and culture critic William Burroughs in the 1970s. The essay implies that since power and social control cannot exist without words and would therefore be limited without them, that the absence of language can be a potential purist form of liberation. Would that were only true for the audience subjected to this mandatory viewer quiet time.

Isaach De Bankole is simply The Lone Man, a monosyllabic American gangster on a mysterious mission to Spain, where he’s delivering small quanitities of diamonds to numerous equally nearly speechless contacts who pop up repeatedly, usually in sunglasses, and often at sidewalk cafes. These seemingly shady transactions involve exchanging contraband in tiny matchbooks, where messages written on paper within are then swallowed whole by The Lone Man, and always washed down with no less than two simultaneous cups of expresso, but no double expresso if you please.

Filling this mounting tedious void, are platitudes on rewind about mortality, cemeteries, the musical memories inside violins, and man as no more than a collection of molecules spinning in ecstasy. There’s also a nameless woman known only as Nude (Paz De La Huerta) stalking the decidedly disinterested Lone Man in his hotel rooms, while always in the buff and usually wearing only glasses. Her role here seems to be to prance around in a state of undress for most of the movie, providing too much information meaningless displays of female nudity.

Also turning up for split second cameos are Tilda Swinton in a one way conversation with the diligently passive Lone Man about other movies minus words, after which she departs with an open umbrella on a sunny day. Also, Bill Murray as some sort of evil American plutocrat who appears to be in league with the US military, and falls victim to far too many locks on his own fortress doors.

The Limits Of Control, or rather limits of patience, just seems too long a stretch with too few points to be made, and really not much mystery to this mystery. The cinematography and poetic expanse of Spanish landscapes captured by Christopher Doyle (In The Mood For Love) are exceptional, and a certain elegantly crafted suspense is initially aroused. But what feels missing is any satisfying dramatic climax, or concrete sense of narrative purpose.

Most important rule of thumb when making movies: It’s the artist who is supposed to suffer for art, not the audience.