NewsBlaze News
Home Entertainment Movie Reviews The Last Word Of The Living On ‘Drag Me To Hell!’

Sam Raimi’s “Drag Me To Hell” is the trippiest horror flick that I’ve seen in ages! It tastes like a ‘tamale pie from hell,’ with all the ghastly ingredients of ghoulish gruel imaginable: a rotten ‘gypsy curse’, economy of spookiness, retro-special effects (bile, blood, & worms), John Waters’ character stereotypes (Clayton P. Dalton’s parents), fake realism in the sets, plum-dark humor, and a parking garage with a slime-green Oldsmobile that is creepy from the get-go.

The get-up and make-up, including the gangrene-infested portable dentures, of Mrs. Ganush (Lorna Raver) is the sickest thing since Norman Bates’ mother spins around in her rocker chair to the strains of Bernard Hermann’s sonic catcalls! If all you can do this summer is stare blankly at her bloodcurdling visage right here on this post, then more power to you; this will keep you well stocked with nightmares for beddie-time for about a decade or two. And what do you think of that Harvest Cake for a State Fair Blue Ribbon, with a witches’ eyeball and buckets of blood as the creamy filling in the center.

Christine Brown (Alison Lohman), who is a former fat girl from a farm (see photo ‘Pork Queen Fair’), is an upwardly mobile bank loan officer who affixes her eyes on an assistant manager’s position at the bank. She seizes the moment to impress her boss (David Paymer), by denying another loan to an ailing gypsy lady, who has been in the same home for the past forty years. Mrs. Ganush attacks Christine after the denial, security is called in, then Ganush stomps out of the bank ranting, “You shame me!” After work the handkerchief-bearing dervish puts a curse on the lass with beaucoup English on it. 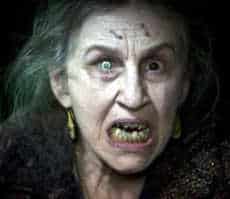 The remainder of the story is the manifestations of the curse, in its many fanciful forms. Some of the greatest pageants of horror ever follow, for humor, excitement, shock, paranormal conjuring – you name it. A partial checklist of these are: the two visits of the Lamia (Satan or blasphemous Beelzebub of sorts?), the many fortune-telling episodes (Dileep Rao as Rham Jas does most of the heavy lifting, as far as how the demon conducts his business), the visit to the parents house (the Harvest Cake incident), the bedroom nightmare, the seance, and the finale at Oakwood Cemetery.

A few of these clips will not leave me alone, so I thought I might be able to purge them from my ‘Doomed Soul’ by sketching out for you the vivid strains of a gory malignancy that plagues my waking hours with exquisite recall. Moreover, I took good notes on my second screening last Saturday, at South Park Meadows Cinemark, so I’m privy to the dastardly details in scrawls of note-jots.

One of my favorite spots is when Rham Jas, a local soothsayer (Dileep Rao), gives Christine an animal sacrifice book to appease the Lamia (Bad Juju). The Lamia pays her a visit and spreads his hideous silhouette around her house like Nosferatu (Max Schreck) in the 1922 silent. The subtlety is that only a shadow is seen climbing the stairs, with loud clanking sounds scaring you half way to the funny farm.

Christine is caught in a maelstrom of wind, and tossed around the room like a Raggedy Anne doll with foul manners. The house is disheveled; looks like it’s been ransacked by raccoons forging for fresh vittles. Miss Brown gets a fire under her and grabs the closest kitchen knife, then commences to eyeing her pet kitty suspiciously, slumbering soundly in her petite, comfy bed. Suddenly (somethin’ nasty transpires), she is shoveling dirt on something grey and fuzzy and saying to her boyfriend, “It’s tomato juice,” when he questions her about the red stain on her shirt.

Another memorable scene is when Christine is dropped off at a huge, foreclosed mansion for an exorcising session with the experienced medium, Shaun San Dina. Shaun is still grumpy about losing the soul of a little boy to the Lamia back in 1968. This session is a seance to break the curse, once and for all, of this soul-thirsty demon, who trumped the charms of San Dina in this very same spook house a long time ago.

An overhead shot does the trick for scary ambience and some shots of oval portraits of the departed on the ceiling gave me an uneasy, creepy feeling. A conjuring of the bad genie is in store, a goat sacrifice and the use of a large machete will be utilized in some capacity. Rham Jas urges her, rather orders her to chant: “I welcome the dead into my soul.” This cacophonous chant resounds, chandeliers rattle, ghosts guffaw, phantasms appear then vanish, and loud noises blare out of the mini-theater speakers like a Halloween sound effects record from Wal-Mart!

Shaun is possessed and her assistant inhabited with demons as well. He dances the Macarena in mid-air and regurgitates a kitty-ghost and enough red fire to toast the Taj Mahal. The goat utters at some point, “Black-hearted whore,” to li’l’ old Christine. Shaun San Dina croaks from all the stress and chaos that is spewed out by the Lamia Bad Boy. Miss Brown thinks the curse is lifted, but this is a charade. She is shocked to learn from Rham Jas that the curse must be passed on to another victim, before it can disappear, and it may even be given to someone who is already dead.

The Oakwood Cemetery scene, near the end of the film, is one of the raunchiest romps in ‘Horror History.’ Christine goes to the grievous graveyard, with raging rain, thumping thunder, and livid lightning, in order to return the cursed coat-button back to her nemesis of a sorceress gypsy hag, Mrs. Ganush. The camera angles are all diagonal and eschew and the film color is icy blue/grey, no, make that casket blue/grey, as in a mucho mother of a gypsy funeral.

I don’t want to give too much away, but Miss Brown gets into a tussle, or better a rumble with this dead moll, a worm-infested cadaver, and bobbles profusely in mud puddles as big as Noah’s Ark; you might remember ‘the forty days and forty nights’ flood fiasco. Christy is bonked on the noggin by a mammoth silver crucifix, and almost drowns. She finally emerges triumphantly, winning the muddiest wet t-shirt contest of the millennium! Raimi cuts to a peaceful shower and she is suddenly clean as a whistle, Irish Spring all over and ready to bail from LA.

Virtually every scene has Alison Lohman in it. She handles the abuse well; some have called her a female Bruce Campbell in her talent for curbing her emotions with cool-it control. She spews blood, sucks up a fly, chomps on nasty Harvest Cake, chants useless sorcerer slogans, and frolics in the mud with more aplomb than Linda Blair and Sissy Spacek put together. Lorna Raver can now get any choice horror flick role that comes down the pike.

For a theme Sam has the Macbeth one of ambition. Christine wants to move up in the world, but gets derailed by a powerful gypsy matron. She pays dearly for this sin, and goes down to the devil both literally and figuratively. This is a morality play for these times. If you step over the line, or get too greedy, by way of a social climb up the ladder of success, powers greater than yourself will shoot you down, you might even find yourself in Hell. Sam Raimi is Dante for ‘The Internet Generation!’ The mores of ancient times still apply today, be forewarned. Just because society, science, and technology have come a long way, doesn’t mean that the laws of decent behavior (ethics) have changed too – or something like that.

Sam Raimi has returned from the dead with “Drag Me To Hell!” He might think twice the next time he’s offered another wimpy, commercial Hollywood directing job. He does camp-horror best, and can probably sell as many movie tickets as ‘Superman,” “Ironman,” and “Spiderman” combined. The devil is in the details, literally!