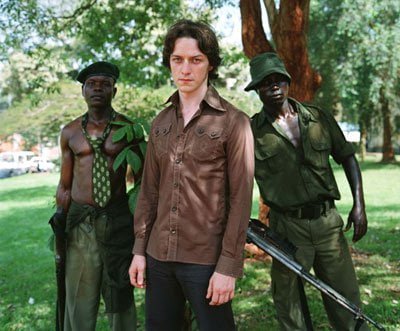 This fairly-faithful adaptation of the best selling novel of the same name was directed by Kevin MacDonald who must be credited with coaxing an Oscar-winning performance out of Forest Whitaker, even if in service of a mediocre melodrama. For while Whitaker’s interpretation of Idi Amin is admittedly mesmerizing, what’s nevertheless disappointing is the script’s reluctance to humanize its antagonist, settling instead to portray him as that stereotypical mental patient (ala Hannibal Lector) who alternates unpredictably between the polar opposites of a refined charm and sheer brutality. 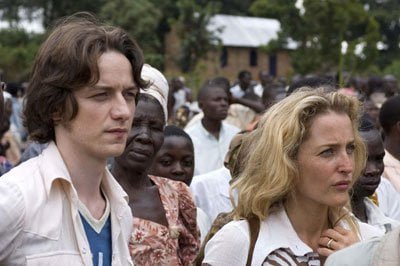 The picture co-stars James McAvoy as Dr. Nicholas Garrigan, a recent med school grad who arrives in the country planning to practice among the poor. However, after being recruited as the head-of-state personal physician, he soon finds himself at the beck-and-call of Amin, serving also as a confidante, sidekick and stand-in at the presidential palace.

Enjoying a Mercedes convertible and other considerable perks of his plumb position, Garrigan initially has no problem with his job. But as evidence of the wholesale ethnic cleansing unfolding across the countryside is gradually revealed, he becomes acutely aware of his boss’ penchant for cruelty and of his own implied complicity as a medical mercenary. Then, when members of the cabinet start disappearing, too, the doctor suddenly has a reason to fear for his own safety, since he’s become infatuated with one of Amin’s neglected wives (Kerry Washington).

More fiction than fact, The Last King of Scotland is less an historical epic than an unlikely-buddy flick about a carefree adventurer completely compromised and corrupted by the embodiment of evil. Recommended for the opportunity to witness Whitaker at his very best, despite the fact the gifted actor was restricted by a screenplay which failed to imbue his character with a complex range of emotions or motivations.